Potential for Renewables in the Swiss Market

This blog article is a résumé of our recent webinar on renewable energy in Switzerland.

In terms of a carbon footprint, Switzerland is a very clean country as there is a low amount of electricity produced using coal, gas or oil. If we compare this to the rest of Europe, we see the impact of much larger fossil fuel usage, leading to a higher carbon footprint. At the same time, we see that the proportion of electricity from other renewables has grown in the last few years in the EU, much more so than in Switzerland.

Switzerland is an important hydropower nation, but not the king. The king for Europe is Norway, which is producing up to 30% of Europe´s hydropower, meaning this power is not only being used in Norway itself but is being exported to the surrounding Nordic countries and even into the continental market. Clearly in terms of hydropower they have a very large share of Europe’s hydropower.

Why has Switzerland been slow on the uptake of other renewable energies?

Switzerland is seen as a ´green´, environmentally friendly country, but compared to the other European countries there hasn´t been much evolution in its energy production in the last decades – largescale nuclear production, lots of hydropower, but a very slow development towards the energy transition. We are talking here about the move towards the production of electricity using wind turbines and solar panels. This sluggishness comes down to three main causes:

Switzerland and the energy balance in Europe 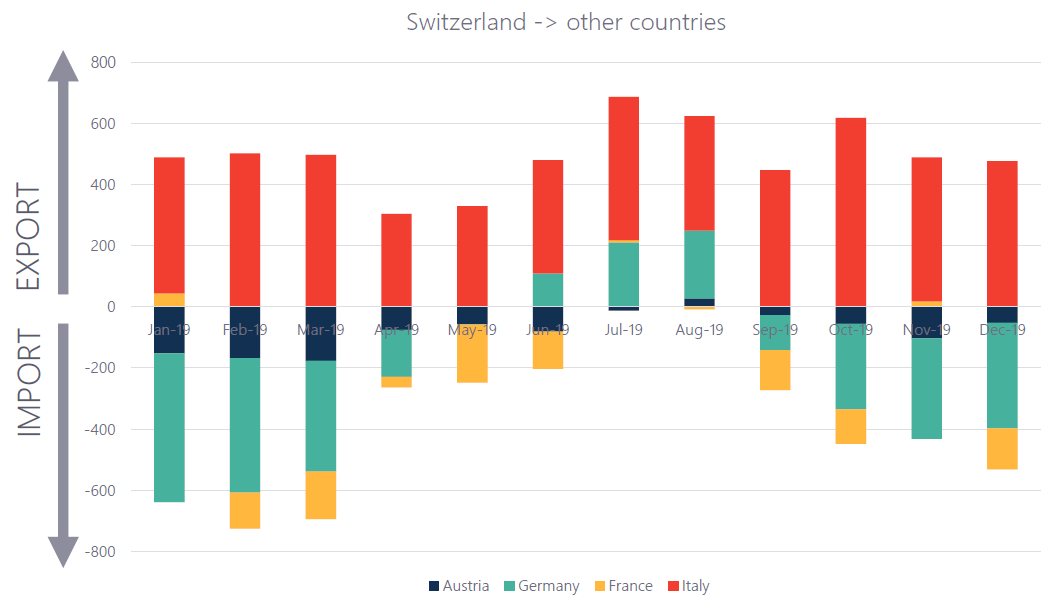 Switzerland in general produces more electricity than it consumes – it is a net exporter of energy, but seasonality has an impact on this. During the summer months there is a lot of hydro energy being produced, and therefor a big quantity of energy is exported. This decreases gradually and over the winter months Switzerland becomes a net importer of energy. It has an interesting geographical position in the middle of Europe connected to big electricity-consuming markets: importing and exporting to Germany, exporting to Italy, importing and exporting to France (where prices are sometime cheaper, sometimes more expensive), and importing from Austria.

We should not forget Switzerland´s interesting geographical position and important hydropower production. Will we see in the coming years Switzerland start to tap into the energy transition potential and become an important country in Europe in terms of energy systems?

As we know, renewable energy production from wind turbines and solar panels causes an intermittency issue. With wind turbines, we see variations in the amount of electricity you get depending on the wind in that season. As a result, those dependant on these wind turbines will at times export electricity to the grid, and at other times import electricity from the grid. With countries with a lot of wind power production capacity, like Germany or Demark for example, we see a strong correlation between the availability of wind and the prices in the spot markets. When there is a lot of wind production, energy gets injected into the grid, lowering the spot prices. When there is not a lot of wind you see these prices peak.

Solar is more stable and predictable but does depend on the sunshine – short-term intermittency causes technical challenges because of continuous variation in the amount of electricity you have available.

Hydro power as a solution for seasonal intermittency

With the cost of batteries dropping very rapidly at this moment, people are looking to batteries as the answer. With the energy transition, there will be a time soon when it becomes economical to have battery stations in factories to store and use the electricity at moments when wind or solar is insufficient. This indeed makes sense for short-term intermittency issues on the grid.

However, we also see challenges caused by seasonality – a wind turbine will produce less in the summer months, as there is less wind. With a PV (solar panel) installation we see the reverse, with more electricity produced during the summer months. This, however, is a problem we cannot solve with batteries. If we predict a future with 100% renewable energy – which is where current plans are pushing Europe – we are going to have a huge problem with seasonality. Batteries only make economic sense if you can frequently load and unload them, so it makes no sense to build a battery station when you´ll only charge during summer months and discharge during winter months.

Instead of looking to batteries to solve the seasonality issue, we could look to hydropower – more specifically stored hydropower.

This is the capacity of hydropower in Switzerland:

As you can see, a lot of the capacity is storage and pumped storage – both can be used as a seasonal battery. Pumped storage is more interesting because it can be loaded at moments of high renewable energy output, so if you build a lot of solar capacity then during the summer months you could use that electricity to pump extra water up to the basin higher in mountains. Indeed, people are beginning to entertain this possibility, where in the future a massive battery in the alpine region that is well connected with surrounding markets could support the European energy system and do away with the seasonality issue.

As mentioned already, one reason for Switzerland´s failure to increase its range of renewable energies is the lack of subsidies available. However, what we see today in more and more countries is that these subsidies are no longer needed for renewable energy to be economical. 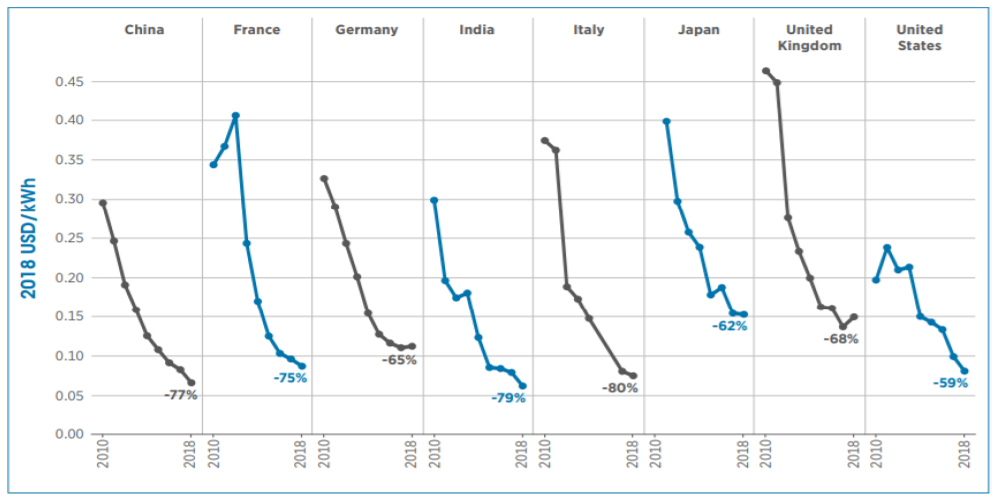 This is an example of solar, but wind is a similar evolution

We´ve seen big drops in the cost of energy due to which renewable energy in many countries has simply become the cheaper option. It will be interesting to see in the coming years whether Switzerland and other alpine countries (i.e. France and Austria) start to take advantage of this. For Switzerland, there is more the potential for solar energy rather than wind due to resources and landscape issues. If solar continues to drop in price we may start to see them appearing on more roof tops in Switzerland, where in the summer months they can help to drive the hydro-powered seasonal batteries, and in turn help to balance European grids.

What does this mean for you as an end consumer?

As the need for subsidies is minimal in today´s markets, Project Developers are looking for financing by finding someone that would buy the electricity. These are Power Purchase Agreements (PPAs) that are offered to end-consumers. With these in hand, Project Developers can go to the bank and say that they have secured the price and offtake for the electricity they will produce with, for example, the solar panel park they will build. There are two types of PPAs; on-site and off-site:

The future of energy supply

We are looking at a very different market in the future in terms of how you buy energy; we will go from having one electricity contract and one gas contract per plant, to a situation where you might have an on-site PPA, some demand side management inside your factory, one or more off-site PPAs from which to buy energy, you might also have a battery station, or the ability to plug into your car park batteries, and you might be pushing electricity back to the grid. As you can see, the future of energy supply is looking more complicated, with a more complex set of contracts to be managed that have more complex risk management operations.

Will Switzerland remain stuck in the power production of the 20th century, or will solar and wind finally take off now that their pricing has become much more competitive? We might have seen slow development in Switzerland so far, but there are good reasons for change and a lot of potential for future years. Switzerland may well become an even larger exporter of electricity towards the rest of Europe. Will Switzerland become the Alpine seasonal battery for European renewable energy? The first steps have been taken. What PPA opportunities will this open up for industrial users in Switzerland? This is a good time to consider whether your factories in Switzerland might be open to some very interesting PPA possibilities in the future. 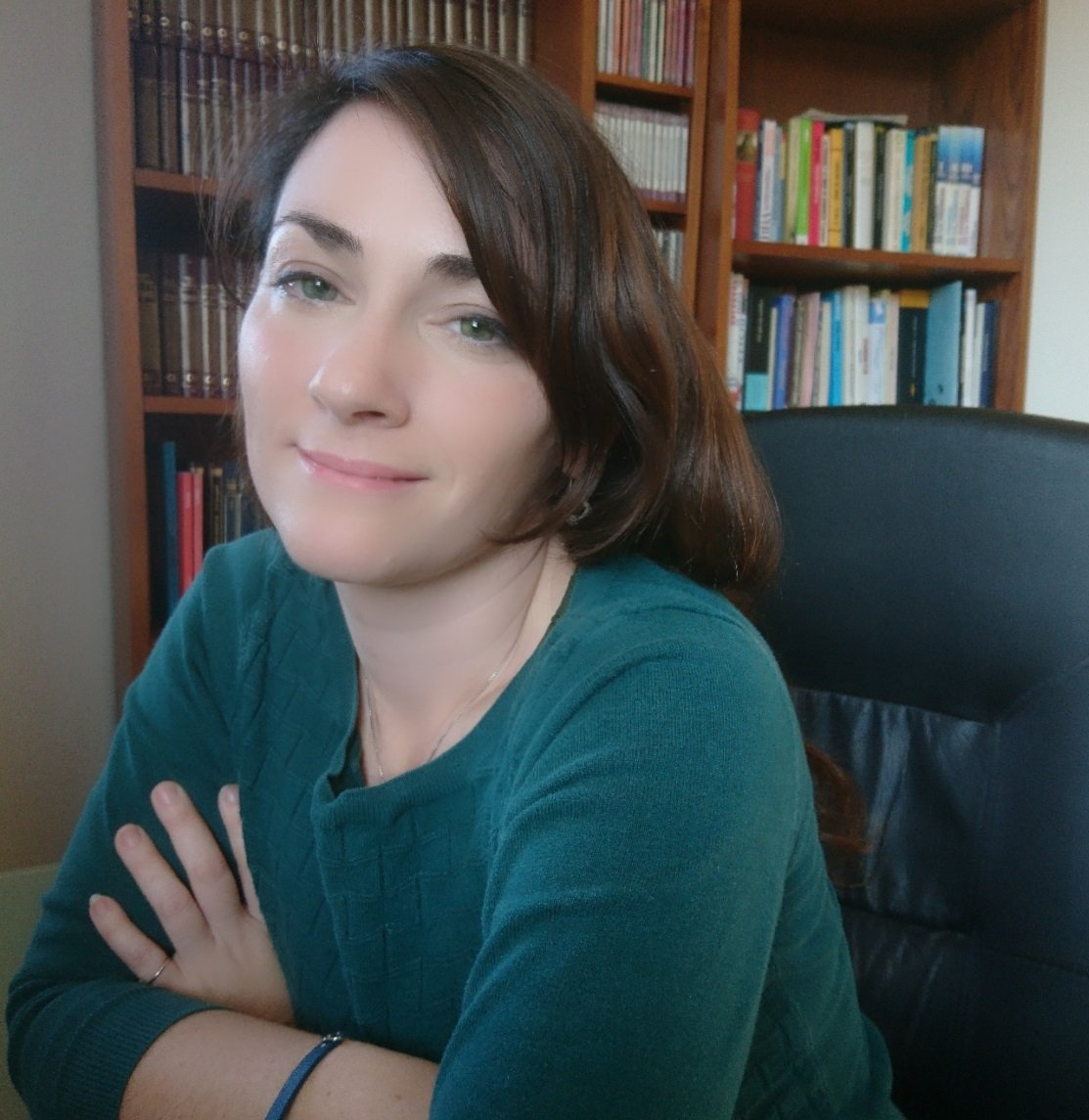