Renewable energy has moved beyond the experimental phase. Economies of scale have reduced the investment costs to the so-called “grid parity” level, the level at which the renewable electricity is cheaper than the standard power from the grid. Due to this, massive investments are flowing to renewables. In 2017, 61% of all power production capacity that was added in the world was renewable. And the investment costs continue to decline. Interestingly, we’ve recently also seen a sharp decline in the cost of batteries. These could become a key infrastructure to deal with the problems of intermittent wind and solar power production.

To finance the renewable power investments, suppliers are offering Power Purchase Agreements (PPA’s) to large consumers. These are agreements where you buy electricity directly from the (renewable) producer. There are two varieties:

Whether on-site and/or off-site PPA’s are interesting or not depends on factors such as regulations in a country, cost level, resource availability, etc. In general, on-site PPA’s will generate large savings (dollar or EUR per MWh) but for small volumes. Off-site PPA’s will generate smaller savings but for larger volumes, so that they have a bigger impact. With markets that have risen to historical highs in many countries recently, fix price off-site PPA’s have been smartly marketed as opportunities to generate savings. However, many of those have a high risk of turning into a nightmare when markets start to fall. Therefore, before entering into PPA negotiations, it’s important to get well acquainted with the ins and outs of these instruments and set up an energy transition plan.

There’s a whole range of terminology used to describe off-site PPA’s, but these are the main distinctions that we currently make:

Making the right analysis of a PPA proposal’s typology is important for making the right decisions. Which type fits your needs best, depends on your energy transition plan.

The energy transition will change the way we buy energy forever. We are moving from having one natural gas and one electricity contract to a much more complicated set of contracts: combinations of on- and off-site PPA’s, contracts for residue and balancing energy, battery storage contracts, demand side management contracts, third party agreements for hedging, etc. Moreover, these contracts can come in complicated combinations of serving different sites. This is not futurology; all these new types of energy proposals are already on the table in more and more countries. Therefore, an energy buyer cannot ignore the energy transition and needs to work out a plan.

THE FACTORY OF THE FUTURE:

In a first step, to define a plan, a company should make its renewable energy target more concrete. With stakeholder analysis and an assessment of “the factory of the future” and what attitude you want to adopt to all these new technologies, you can finetune your general “X% of renewable energy by this year” target to much more concrete targets of what you want to achieve by buying Guarantees of Origin or other paper green energy products and with PPA’s. You can also determine what role you see for the different technologies and whether you want to be an early adopter or not.

In the second step, you can align your renewable energy plans with your overall energy price risk profile. A budget risk client wants to stabilize energy costs over the long term. Prudent, step-by-step buying of long-term fix price PPA’s can service those needs. Market risk clients need to avoid ending up with a fix price PPA in a bearish market, paying more than what they or their competitors would pay if they bought energy from the grid. For them, spot prices with discount might be a better choice. A good analysis of your risk profile helps you to determine what pricing formulas fit you best.

PPA’S ADAPTED TO YOUR RISK PROFILE: 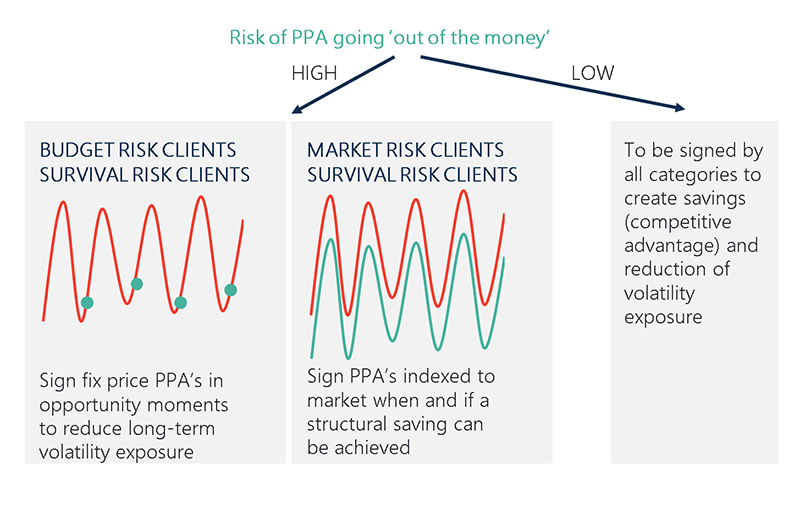 In a third step, you should align with your financial department on what instruments are acceptable to them. PPA’s with financial settlement and cross-border PPA’s will generate different cost and revenue lines, in some cases even on the balance sheets of different legal entities. By discussing this upfront, you avoid the frustration of seeing the deals you negotiated falter in a late stage because the price management structures they include are not acceptable to your company.

In a fourth phase, you can go and assess the potential you have in all the different sites in the different countries in terms of on-site and off-site PPA’s with technology scans and market scans.

Executing this energy transition plan will not work if you don’t put in place the right decision-making processes. Therefore, your plan should also include tables with responsibilities and workflows for the decision-making.

Based on all this analysis you can edit a detailed energy transition plan that gives everyone in your organization concrete guidance for realizing the corporate renewable energy goals.