Is a golden age of batteries coming?

Bloomberg New Energy Finance (BNEF) recently published this article in which it announced that the levelized cost of electricity (LCOE) of batteries has dropped 35% to 187 $/MWh since the first half of 2018. Batteries seem to be on the steep end of the cost reduction curve as we can see in this graph: 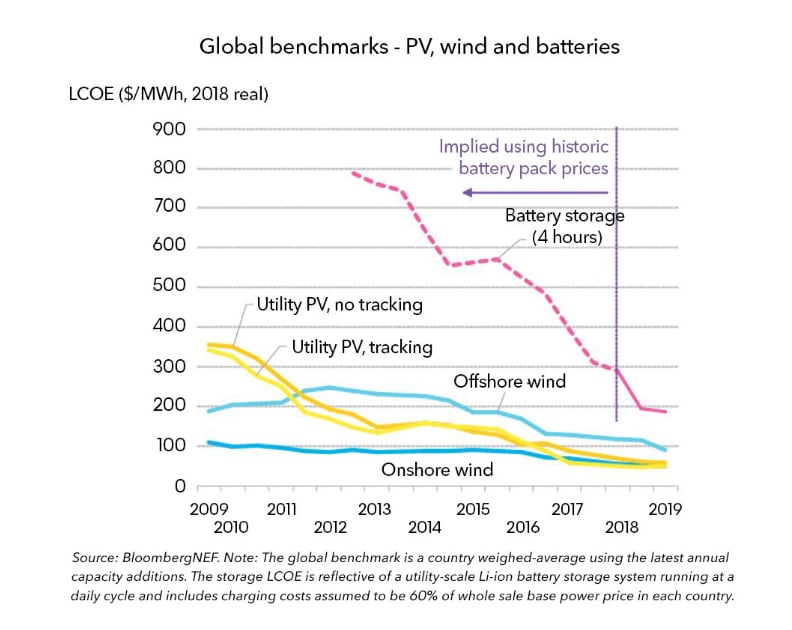 And better might be coming. Switzerland’s Innolith claims that it has developed the world’s first battery with an energy density of more than 1.000 kWh/kg. That is four times more energy per kg of material than the best batteries of Tesla at this moment. It is to be seen of course at what costs such batteries can be produced, but improvements in energy density are an important driver of lower battery costs.

This is of course good news for fans of electric mobility as cars, motorcycles, trucks, bicycles with longer driving ranges and/or lower purchase prices will become available. But batteries are also considered to be a cornerstone of the energy transition, the move towards more renewable energy. They can solve the intermittency issues by storing electricity when wind and/or sun are abundant and fill in the supply gaps when there is a shortage of production.

So, does this mean we should all run to the stores to buy these new batteries and start saving money by delivering the flexibility that our new power markets crave for? To answer that question, I have analysed this cost of BNEF’s 187$ per MWh battery against the potential gains as an industrial user in my home country Belgium. This cost was calculated based on a daily usage of the battery during four hours. This means you can charge the battery during four hours and discharge it during another four hours.

There are four main options for making money by installing batteries in your facilities:

Let’s have a look at what revenue the first three options can generate in Belgium. In other words: with prices down to 187 $ per MWh is there a business case for installing batteries in an industrial company and make money with them without getting subsidies? Or, we could also say, have batteries reached grid parity status in Belgium?


If your contract with your supplier stipulates that you pay your electricity on an hourly basis, i.e. consumption during an hour times the spot price for each given hour, you can make money by:

Logistically, it’s easy to set this up. Spot markets work on a day ahead basis, meaning that at the start of every day, you know exactly what price you will pay for each hour. If you can load that data into the battery management system, you can make sure that it loads and unloads in the right hours.

For this system to make money during a given day, the spread of the average price during those four cheapest hours and those four most expensive hours needs to be equal or larger than that 187$/MWh. 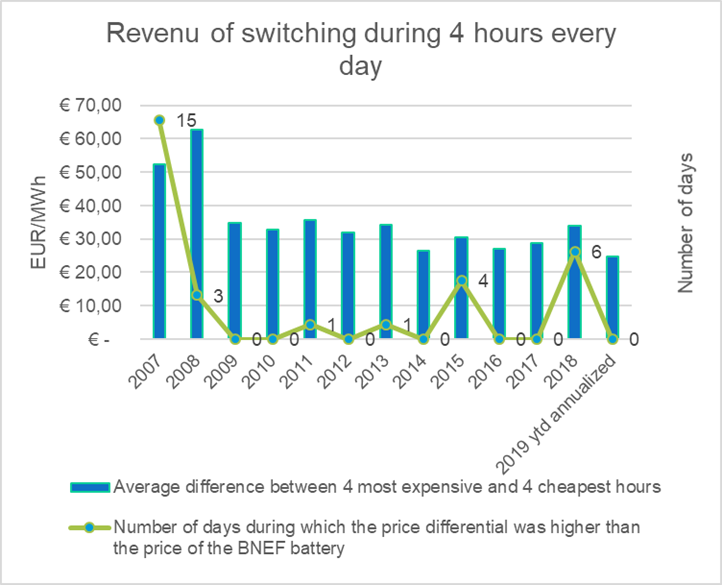 Since the 1st of January 2007, there were only 30 days during which your battery would have made money. In recent years, the difference between the four most expensive and the four cheapest hours has dropped below 30 euro per MWh. Which means that the cost of batteries would still have to drop by a factor of 5 for batteries to make money arbitraging the price difference in hourly spot prices. Taking as an example the evolution of PV technology in the last decade, I wouldn’t say that this is impossible. But we are not really there yet.

Hold on, you might say. Isn’t the energy transition going to bring wider spreads in those prices? Will the increased usage of renewable energy not lead to more extreme shortages and surpluses of electricity resulting in extremely high, respectively low prices? Haven’t we heard about negative prices because there was more electricity produced than what the consumption could take?

Yes, in theory spot price differences should be on the rise. But in the empirical reality, we see that price differences are declining or steady at a low level. From time to time peaks in Belgian spot pricing have occurred, with prices up to 3000 euro per MWh where they are capped. And in other cases, we’ve seen negative prices, when supply outstripped demand. These extreme events make for spectacular headlines, but they are very rare. In Belgium, negative prices occurred since 2007 in 0,042% of the time. In Germany, which has grown to a 40% renewable energy production, we see a higher percentage of negative pricing. But it’s still statistically negligible and it fails to impact the spread between expensive and cheap hours: 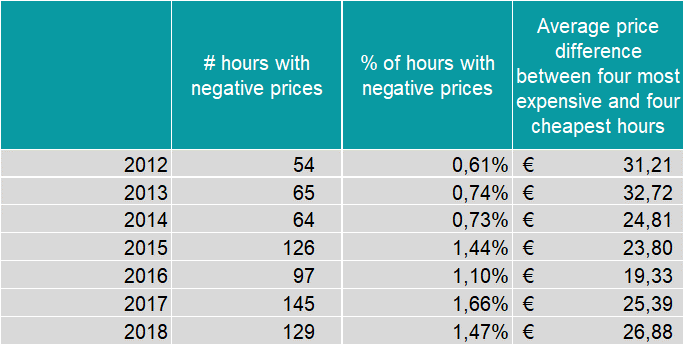 So no, the energy transition is not resulting in massive price spreads in the spot markets that make batteries huge money makers. Moreover, the 187 dollar price of BNEF is based on a period of usage of 16 years. If in those 16 years a lot of batteries are installed, demand during cheap hours will go up as will supply during expensive hours. This will reduce the spread in the hourly prices. Batteries for making money with hourly price spreads are essentially an instrument of arbitrage. And arbitrage always shoots in its own foot, as it hollows out the basics of its money-making potential.


In deregulated markets, the commodity pricing has moved to a “per MWh” model. But in regulated markets, prices are always composed of a capacity and a consumption term. That means that even in open markets like Belgium, the regulated tariffs for usage of the grid are largely based on the maximum capacity that you consumed during a certain hour. In some countries, this capacity is to be contracted and you will get penalties if your effective capacity rises above the contracted capacity.

In Belgium, you pay for the maximum capacity consumed during the last 12 months. Therefore, making one peak during a year can be very expensive. Hence the potential for peak shaving. By reducing your maximum capacity off-take you will reduce what you pay on your capacity terms in the grid tariffs.

Batteries are a great tool for such peak-shaving, as they can be programmed to deliver the extra electricity when your demand rises above a certain threshold. You can then recharge the battery during hours when your capacity off-take is low. Let’s presume that our BNEF battery has a 1 MW capacity. Now, for an industrial user in my hometown Izegem, the capacity terms are 2,436 euro per kW per month for usage of the distribution grid and 2,562 EUR per kW per month for usage of the transport grid. If you manage to effectively reduce your maximum capacity peak by the 1 MW of capacity of your battery, you can save a total of 59.976 EUR per year. Now our BNEF battery produces 4 MWh per day, and the cost per MWh is 167,97 EUR per MWh (including 30 EUR per MWh for charging the battery during cheap hours). Meaning that the total cost of operating the battery during a year is 245.236,2 EUR. So, in this case, the cost of batteries needs to drop by a factor of 4 before peakshaving with batteries starts to make money.

3. Marketing your interruptibility by using batteries


Some countries, among them Belgium, have introduced mechanisms to balance the grid by asking large consumers to switch off a certain capacity during certain periods of congestion. Such mechanisms are usually run by transport grid companies that are responsible for the balancing of the grid. Their specific conditions differ by country and/or system, but in general they comprise of:

One of our clients has an interruptibility contract with a so-called aggregator that brings together the capacity of different users. It allows the aggregator to switch off 4,5 MW during 4 hours up to 40 times per winter season. These 4 hours make this case perfect for investigating its economics if you deliver this flexible capacity with the 187 $ per MWh battery. It pays 52.000 EUR per winter as an availability fee and 8.100 EUR every time that it switches off. This means that in the extreme case that during a winter you are switched off 40 times, you would receive a total of 376.000 EUR. If we reset that for a 1 MW battery, we’re talking about 83.555,56 EUR, again well below the 245.236,2 EUR annual cost of a 1 MW battery.

4. Conclusion of generating revenues with a 1 MW battery

In our example, the three options can generate the following revenues for a 1 MW battery:

Now, as I’ve mentioned, each of these options has its limitations. Moreover, combining them will pose extra problems. Demand side management means that you have to charge your battery during certain (cheap) hours, meaning that you could make capacity peaks in those hours that undermine your peak shaving. For that reason, a client that makes capacity peaks during the expensive peak hours will be more likely to make money on both pure demand side management and peak shaving than a client that takes its capacity peaks during off-peak hours.

So definitely for a peak hours consumer, it is possible to make money on all three fronts. Whereas each of the options in themselves are easy to set up, making the combination will demand for a more complex automated economic decision-making process. Now, the total cost of a BNEF battery at 1 MW is 245.236,2 EUR. This includes the 30 EUR per MWh cost for charging the battery, which is recuperated by the charging in cheap hours – discharging in expensive hours. So we need to compare our total difference of 114.446 to 186.445 EUR with total non-charging costs of 201.436,20 EUR. So, we’re not there yet but we’re also not leagues away. And with costs falling at such a rapid pace, the break-even or grid parity point might come rapidly.

Governments could decide to give battery technology a push in the back with subsidies, just like it was done for wind and PV technology. An alternative to that is adaptations to the tariff structures so that capacity terms become more important. But with so much incentive for developing better, cheaper batteries coming from the automotive sector, I don’t think that would be a wise way of spending public money or changing tariffs. Let’s just wait a few more months or years, and batteries are bound to become a standard, money-making part of your industrial electricity supply equipment.

Want to know whether batteries are an option to reduce your energy costs? Here are some factors that have a positive impact:

Disclaimer: the calculations in this blog article are purely indicative and based on a fictitious example. Your particular situation depends on the wholesale market, contractual possibilities, grid fee tariffs and interruptibility programs of your particular region. Therefore, the economics of a battery in your sites might be very different from what is indicated in this article. Therefore, these calculations should not serve as an advice of whether batteries are economically viable for you or not.