I promised some colleagues I wouldn’t use the C-word anymore. Yet here I go again. I guess that like many other entrepreneurial types, I try to stem the tide of bad (economic) news by marvelling at how a crisis like the one we are in now can act as an accelerator for change. This is especially tempting when you’ve been talking about ´The Energy Transition' for years with so many clients.

I don’t want to engage in politics in E&C’s blog articles, however, it´s hard not to notice the deep divide between conservative and progressive reactions to a crisis. Conservatives claimed that “it was just a flu” and want the lockdowns to end as fast as possible so that we can return to the world as it was before the pandemic. This is no political statement; I’ve been equally baffled by conservatives’ capacity for denial as I have been by some progressives’ use of the emergency situation to push through societal changes for which they lack democratic majorities.

In terms of energy markets, this conservative versus progressive divide will probably have a huge impact on what the energy transition looks like in a post-COVID world. The cost of renewable energies has dropped vastly; they are no longer expensive ways of producing electricity. Nevertheless, they can still use some financial support. Therefore, the question is how much of the stimulus money will flow to renewable energy initiatives, giving a renewable energy market that was already in excellent shape before the pandemic an extra boost.

So far it doesn’t look very good for a green energy stimulus, as we can see in an article from Vivid Economics. However, it is to be remarked that up to now we’ve seen only a first wave of stimulus programmes. And these were mostly aimed at businesses directly impacted by lockdown. A second wave of money flowing into the economies will probably be much more aimed at longer term effects. Supporting the energy transition would be an excellent choice because:

Nevertheless, where the stimulus money will flow to will depend more on political preferences than economics. Those politicians that want to support renewables, would do well in carefully considering the instruments they chose to do so. The first wave of green energy support – when, for example, solar panels still needed a whopping 450 Euros/MWh to get built in countries like Germany or Belgium – worked with feed-in tariffs or certificate systems. We can have long discussions about their effectiveness. But I want to highlight one particular characteristic. With such systems, the cost was passed on to the end consumer, which saw it as a separate line in their rising energy bills. As a matter of fact, the renewable energy transition is the first such transition where government support could be directly seen in the energy bills. If subsidies for oil or nuclear had always been published as a cost per MWh on households’ and companies’ monthly bills, would so many people believe that they are cheap? This direct pass-through of the cost of the energy transition to end consumers has cost renewables dearly in terms of reputation. Now that the costs of wind and solar have dropped to less than 10% of previous levels, it remains difficult to convince people that they are a cheap choice.

In this light, and taking into account how stimulus money works, it would be better to hand it out simply as subsidies; direct investment support to individuals and companies that choose to invest in renewables. For large projects, all over the world reverse auctions have proven to be a successful technique to keep costs reasonable. In such auctions, a government grants the concession to build, for example, a windmill park or solar farm to the bidder that is happy to receive the lowest amount of subsidy (or, for example, guaranteed minimum price when markets drop below a certain level). From project to project, you can see how such auctioning stimulates investors to lower the prices that they are happy with, incorporating the falling costs of technology in their bids. 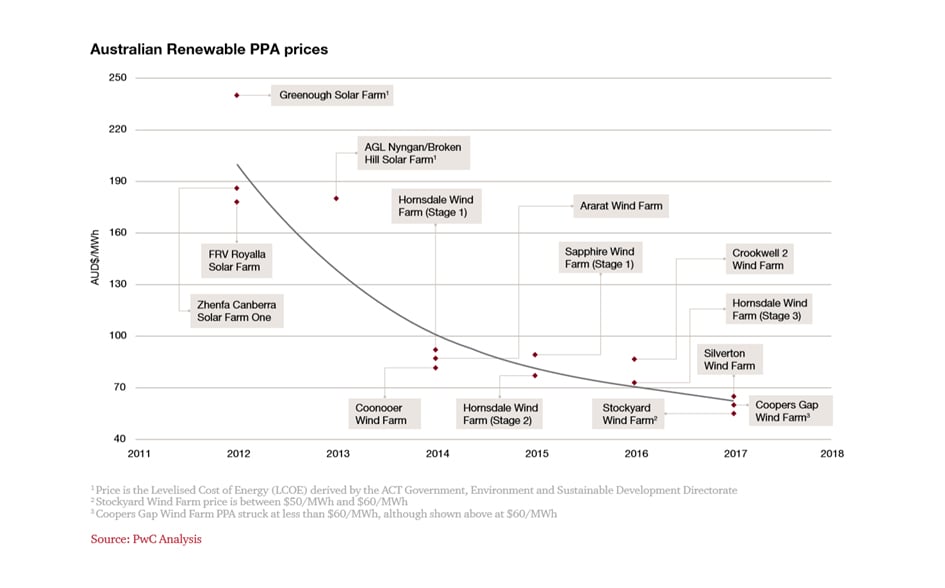 Before the crisis, we also saw a surge in corporate PPAs. More and more companies bought renewable energy directly from the source, by closing a long-term contract with an investor in a renewable energy asset, thus providing new renewable projects with the much-needed income stability to secure financing. However, as energy prices tanked, a lot of these corporate PPAs have been going ‘out-of-the-money’ in recent months. This serves as a painful reminder that they are simply switching the price risk from financier (the bank) to the end consumer through the investor/builder of the project. Governments could consider mechanisms where they assume this price risk, just as they do in the kind of auctions described in the previous paragraph with the Australian example. This would empower the market for corporate PPAs and lead to interesting new market models.

In the end, I don’t believe that a conservative reaction, sending stimulus money to the fossils rather than tomorrow’s energy technologies, will kill the development of renewable energy. Precisely because this crisis has proven that the economics of renewables are strong. While traditional oil companies were documenting record losses and had to sell oil at negative prices for the first time in history, renewables kept generating cash. Left or right, a renewable energy company will fall over if they fail to pay back loans because of dropping electricity costs. But the windmills and solar panels will all the while continue to produce MWhs, raking in money for their new owners who could buy them on the cheap. Again, resilience. There are also strong reasons for banks and other financiers to rethink the models they use for financing renewables. Letting a creditor go broke because the lower electricity prices make them default on the down payments of their loans, is a pointless destruction of money. The windmill or solar panel will not disappear, they will continue to produce electricity and sell it. Lower electricity prices just mean that it will take a bit longer to pay back the loan. Why don’t they devise financing instruments that take this into account?

Some have seen the light. Shell, announcing for the first time since World War II that they will not pay a dividend this year has made the astonishing announcement that they will be carbon-neutral by 2050. Other European oil majors like BP, Total or Repsol have made similar pledges. The current situation is probably showing them that plunging billions into oil and gas exploration and production is just as risky or even more so than investing in renewables.

Industrial users will have to make similar choices in the coming months. Before the crisis, many were making or executing ambitious plans to decarbonize. Will they ditch them or spur them? There will probably be arguments for taking it slow on the sustainability agenda as cash is scarcer and some are bruised by the effects of being locked into expensive PPAs. But the arguments for continuing and reinforcing decarbonization are strong. If the original motivation to go carbon-neutral was the growing sustainability concerns of the customers, then it’s hard to think how the pandemic would not make the general public even more concerned about climate change. And above all, now is more than ever the moment for a company to choose the technologies of tomorrow.

A crisis like the one we’re going through acts like a rapid in the flow of history. Downward trends sink more rapidly, upward trends get accelerated. A good businessperson tries to recognize the winning trends and surf on them. I strongly believe that engaging in the energy transition is a good choice!

Looking for more information on the impact of COVID-19 on energy procurement? Have a look at our set of webinars.