Is hydrogen the green fuel of the future?

Hydrogen is the ‘new’ kid on the block of energy fuels and it’s not difficult to find articles speculating on the role of hydrogen in the energy transition. Already, industrial consumers are seriously considering hydrogen as an alternative for coal or gas, but what factors need to be taken into consideration in order to make that decision? I asked our experts here at E&C to help me answer this question and more. If you would like to delve deeper into the specifics of hydrogen, please read our White Paper on the same subject.

Firstly, why are we talking about hydrogen?

Merlijn
In my opinion, the most important role of hydrogen is to green processes that are hard to electrify, by burning hydrogen instead of fossil fuels in those processes (for instance, high-temperature industrial processes, heavy transport and aviation). It’s secondary, though not necessarily less important, role would be to provide storage in times of excess supply of renewable energy (lots of wind/solar) and to avoid negative power prices by rebalancing the grid in this scenario. Hydrogen is thus an energy-carrier, not an energy source in itself. It’s important to realise here than none of the above makes sense if the hydrogen gas is not produced in a renewable way.

Is this what is meant by ‘green’ hydrogen?

Merlijn
Yes – green, or renewable electricity-based hydrogen, is one type. Hydrogen can be produced through a variety of processes. Hydrogen gas (H2) only occurs naturally at high altitude +- 500km above the earth’s surface as it is lighter than the other atmospheric gases and thus floats on them. Therefore, we cannot capture it directly and it will have to be produced. In 2018, the vast majority of the produced hydrogen (+- 95%), which is not produced for the reasons above but rather for making ammonia and fertiliser or for oil refining, was produced from fossil fuels, emitting lots of CO2.

Benedict
On a macro-economic scale, this would allow us to build large amounts of excess renewable production capacity that you need if you want to have 100% renewable energy and phase out nuclear. But the question is whether it will ever be (micro-) economically viable to do this if these hydrogen productions would be running only a limited amount of time?

For that reason, it might be more economical to build large green (solar) hydrogen production in countries with a lot of sunshine and ship it. This might be an energy transition model for oil-producing countries. Or even a model for sustainable development for developing countries in Africa.

Merlijn
Given the current poor economic viability of green hydrogen, blue hydrogen is considered as being a possible and important intermediate step in the roll-out of hydrogen technology and infrastructure. Blue hydrogen is in essence grey hydrogen in which the majority of the CO2 emissions (up to 90%), are being captured during the process and stored in, for example, empty gas fields (Carbon Capture and Storage, CCS). There is also biogas-based (turquoise) hydrogen which is considered renewable as biogas is produced in a renewable way, though this production path is much harder to scale up in an economically viable way. 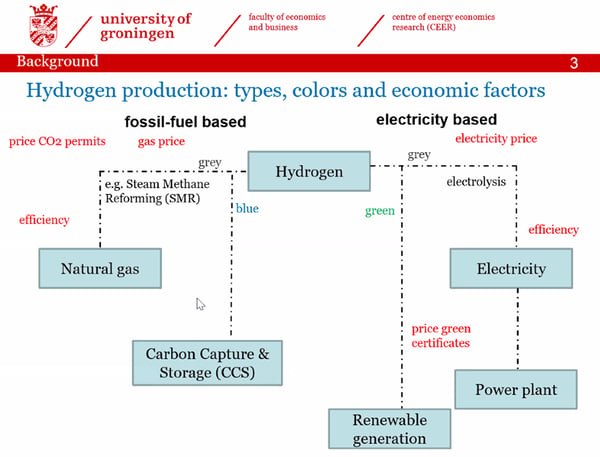 Source: University of Groningen, from an IAEE Webinar on Economics of hydrogen

Considering the price drivers shown above, what is likely to make green hydrogen competitive in the future?

Bart
There are three main factors to consider here:

However, without financial and policy support, it’s hard to see these scenarios happening. Hydrogen would then be produced in the hours of cheap electricity, and this number of hours would need to be enough to have a good utilization rate of your hydrogen installation. But if this amount of cheap electricity prices is expected to be so high, then who is going to install new/enough capacity? Considering this, there doesn’t seem to be a business case to give financial support for green hydrogen. The alternative is to invest in trying to bring down the production cost from electrolysis. Maybe it can be used to help the balancing of the grid. This would help the business case but makes no difference between green and grey hydrogen produced through electrolysis.

If we want the hydrogen from electrolysis to be green, it’s important to ensure that this increase in electricity demand will not be covered by extra gas-fired production units. If that´s the case, you’re just replacing fossil-fuel hydrogen by grey produced electrolysis hydrogen. From an emission report point of view, it would just mean that the emissions in the industry would come down and the ones for electricity production would go up.

Now we know what the economic blockers are, can you tell us the political factors regarding hydrogen?

Bart
National level: looking at alternative energy sources for stability, as well as looking at ways to meet the Paris agreement by reducing their CO2 emissions. This also includes subsidies, possibly even for hydrogen.

European level: there was a Hydrogen Strategy presented in July, which Commissioner Simson spoke about in October.

International level: hydrogen shipments could be the new LNG. As we’ve seen with LNG, it’s a way to disrupt the politics and economics of a regional market and evolve into a global market.

Where does this leave us? What is the strategy going forward?

Merlijn
This table summarizes the ideal scenario. In the end, the aim should be to produce only green hydrogen.

We seem to be moving in the right direction, but what impact will hydrogen have on the energy market?

Merlijn
There are two main impacts I can foresee:

This balancing effect should bring more stability to power spot prices. As the availability of renewable energy and thus the opportunity for hydrogen production is geographically more widespread than oil, gas and coal reservoirs, hydrogen prices could also be more stable as the political events in a single country would have a smaller effect on its global supply than currently for oil, gas and coal. On the other hand, the intermittent behaviour of renewables could increase volatility of hydrogen prices. In the end, this will depend on whether or not hydrogen production will be geographically focussed on hotspots of cheap renewable energy and on the availability of significant storage to overcome periods of lower production.

Talking about risk management, will this be no longer based on hedging (instead shifting to a balance of multiple smaller PPA contracts)?

Merlijn
The job of E&C is to limit the risk a company’s budget is exposed to through the volatility of the energy market. Therefore, more stable–less volatile energy markets reduce the risks. One of the big questions for the future is whether hydrogen production technology will ever reach a maturity at which it is economically viable to include small-scale electrolysis in on-site PPAs. Maybe one step ahead of that would be to include it in larger scale off-site PPAs? In any case, I know that they are working on equipping single windmills with an electrolysis module to create hydrogen at the windmill level. So, if this proves successful, then we can indeed expect to see it in future on-site PPAs. If, on the other hand, it proves more efficient to produce hydrogen on a centralized large-scale level, the energy required for production could still be produced through PPAs, but this is less likely as hydrogen plants would probably aim to take advantage of moments of excess power supply and the associated low power prices to boost their hydrogen production at these opportune times.

Lastly, what could hydrogen mean for industrial end-users?

Benedict
On-site renewable energy products are likely to be expanded with energy storage options in the coming years. Batteries for short term intermittency and maybe hydrogen productions for seasonal intermittency. This means that new choices and economic possibilities will be presented.

It has been proven that picking winners and losers in terms of technologies that make an energy transition is difficult. Two decades ago, many people were convinced that by now we would drive hydrogen-fuelled cars. And anyone predicting the evolutions we’ve seen in solar and wind technology at that moment, would have been called mad. Hydrogen seems to have some promises as it can solve two issues in one go. First of all, long-term intermittency and secondly, decarbonizing heat supply. It’s early days to say whether these promises will be delivered, but it’s sure worthwhile to keep an eye on it.

If you’d like to know more details about hydrogen, the different types and how they are produced, please request out White paper:

We publish daily and monthly market analysis to keep you up to date with changes and influencers in the energy sector.