What is moving the coal market?

2016 could be a year marked by the trend reversal of world coal prices. After years of steady decline, coal prices rebounded in March. In October, API2-prices event hit the level of 65 dollar per tonne, a level last seen one and a half years ago. 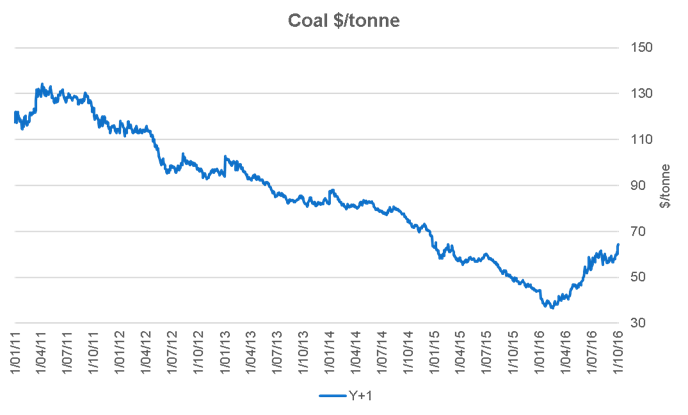 Since 2011, coal prices lost more than 70%. Coal was marked as a “dirty” fuel and in line with the wide spread policy of decarbonisation, other energy sources were preferred. This made demand decrease faster than supply, so prices continuously went down to reach levels below 40 dollars per tonne in February and March this year. These prices made it difficult for miners to be profitable, endangered the entire sector and even caused bankruptcy of some big players like Peabody.

Changes of the Chinese policy are the main reason for the price rebound. China takes about 50% of both worldwide production and consumption. In February, Chinese officials announced the country will close more than 1000 coal mines before the end of year. The mines on the list were mostly rather small ones and had to be closed because of inadequate working conditions. In April, this decision was followed by another one limiting the number of working days in local mines by 16%.

Limiting the coal production should go hand in hand with decreasing coal consumption, as China is pushed to do so because of extremely high air pollution. However, changing to other more ecologically friendly fuels will take some time while mines will already be closed at the end of this year. China is now investing a lot in renewable sources but these investments need some time to be realised. Additionally, some analysts remark that the current grid system is not prepared for more and potentially unstable renewable sources and therefore requires further investments.

On top, we should take into account that China has proven its statements to not always be 100% correct. China claims it’s abandoning fossil fuels, but according to Greenpeace’s report published in July, the country is currently building another 400 GW of installed coal capacity while the shutdown is only 70 GW.

This means China mainly needs to import more coal in the short term (year-on-year increase in August was 52%), which brought coal prices back at profitable levels and is good news for coal miners all around the world.

The rising coal prices are great news for Polish miners as they are struggling with serious problems. Kompania Węglowa, the biggest coal producer in the EU was restructured to Polska Grupa Górnicza (PGG) in order to save the Polish coal sector from bankruptcy. The higher coal prices could help the company to stay alive in a tough market.

On the other hand, the new company is still facing many difficulties which decreases its competitiveness. First of all, the benchmark price index for coal mined by PGG unfortunately is the Polish Coal Index PSCMI1 (not the API2 like on other European markets). However, the Polish index usually follows the European benchmark but this hasn’t happened (yet). As we can see on the graph below, the polish coal prices are even below the API2 index since June. 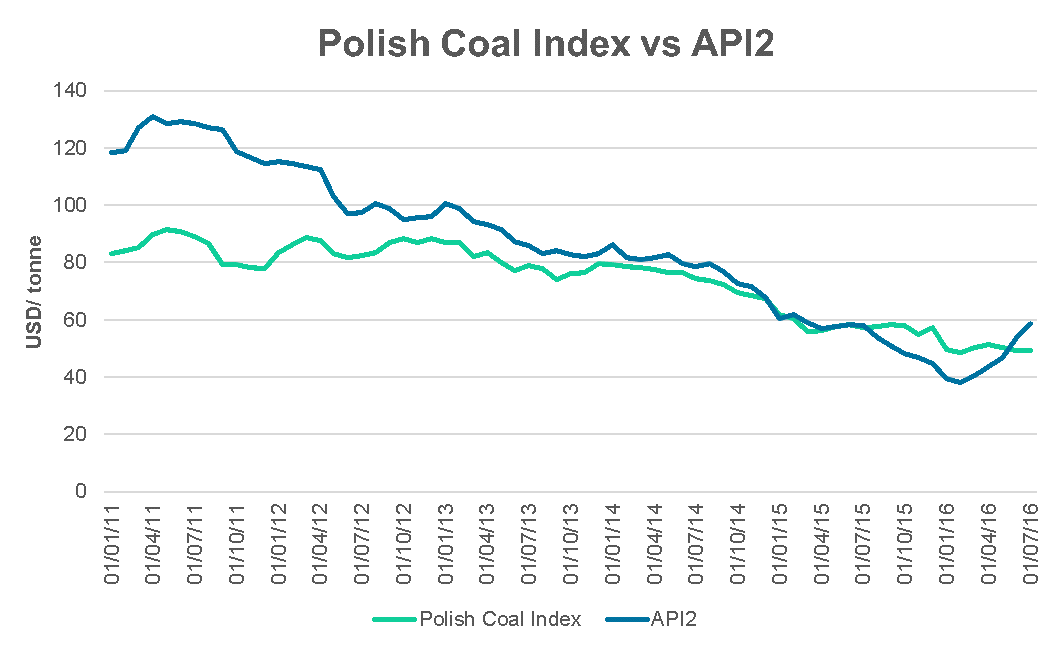 Additionally, PGG is still struggling with too high mining costs. The unions have a very strong position in the Polish coal sector and generally are not willing to reduce the non-standard benefits of workers in the mining sector. Despite some positive changes in the last months like a temporary suspension of 14th month salaries, further and more radical changes are necessary to make PGG fully competitive.

Outlook for the future

Mining restrictions in China led to tight supply in certain regions. As a consequence, the Chinese government last month decided to ease the mining restrictions. In case of problems with supply, local mines would be allowed to increase production to meet demand. On top, the limited working days in the most efficient Chinese mines could be eased as well. However, this was not confirmed by the Chinese officials and for the time being, the market isn’t taking this into consideration.

Seeing the above, we can only be sure about one thing – China is the main driver of coal prices at this moment and any political decision there can impact the market situation.

Consultant for the Central European market.