Let’s start with a brief recap. Support for investments in conventional power plants in Poland is nothing new. Do you remember how in the early nineties the Polish energy was in need of intensive modernization to reduce greenhouse gas emissions? A relatively simple mechanism was introduced: the long-term contract, called KDT (Kontrakt DługoTerminowy – Long Term Contract). This kind of support was simple and beneficial for the investor. After Poland entered the European Union, the KDT had to be changed because it was seen as unlawful state aid. The KDT became a transition fee as of 2008, a part of the distribution costs.

In August last year, the so-called power stages were introduced to significantly relieve the power system in Poland. This revived the discussion on the promotion of investment in conventional generation sources.

As you can see on the image above, the available capacity and demand are almost at the same level. This is a clear sign that similar problems might occur in the future. Therefore, other solutions need to be introduced in order to have a more stable national power system. Some other European countries are in a similar situation but the risk of supply constraints isn’t that significant as it is in Poland at the moment.

This is exactly why the Ministry of Energy worked on functional solutions for a capacity market in cooperation with experts from PSE SA. The document says they want to ensure the continuity and stability of electricity supplies to all end-users in the country on a long term. The project is largely based on the concept of the capacity market in the UK.

The proposed system assigns one party that is obliged to determine the size of the power demand and needs to organize the purchase of this amount of power based on . The asking price will be gradually lowered and the winner will be the one who offers the lowest rate.

Below you can find the schedule of processes on the capacity market. 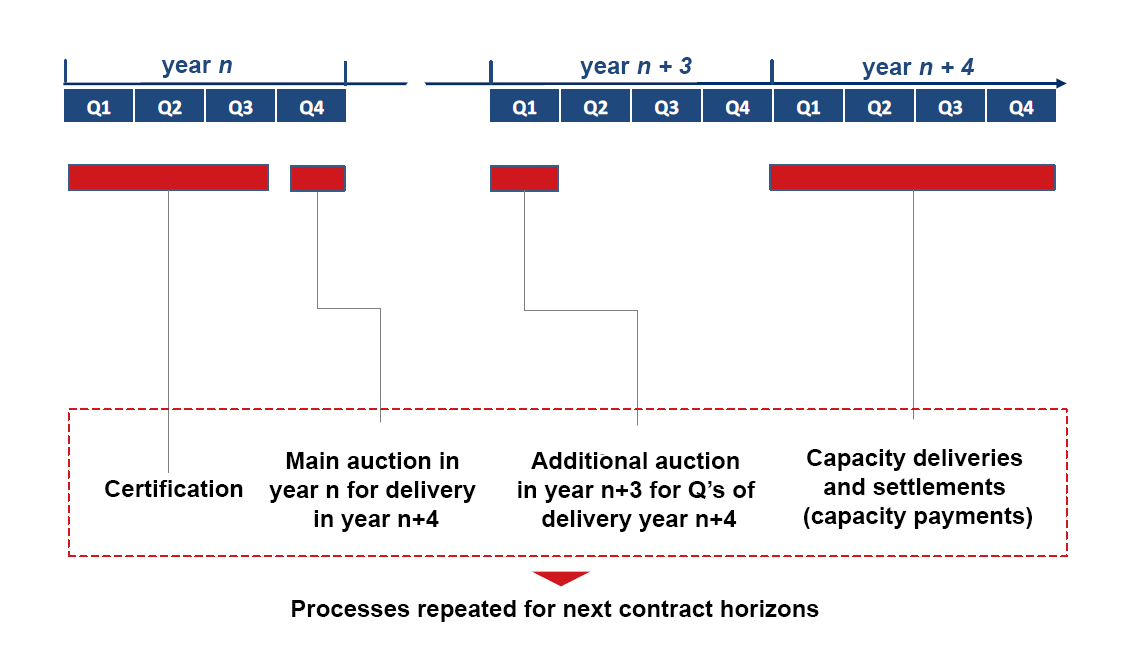 Unfortunately, the example of Great Britain shows us that this solution does not guarantee investment in new blocks. According to the blog of Professor Świrski only 5% of the funds will be invested in new gas-fired units and the vast majority will support the old coal-fired plants to continue to be maintained.

In my opinion, it’s a pity that the solutions were only based on the national system without having a look at the opportunities of cross-border trading. As well, solutions providing Demand Side Response are only marginally treated. I also share the opinion of different commentators that point out that the capacity market as currently proposed might be considered as unlawful state aid. My last and most important remark concerns the cost for introducing the capacity market. ClientEarth’s analysis says that the capacity market based on the current proposal would mean an additional cost of 80 to 90 billion polish zloty (20 to 22 billion euro) between 2021 and 2030. The average energy bill would increase by 30%. The project only shows settlement mechanisms without providing any cost simulations. It seems like the Ministry of energy tries to solve the problems of the Polish energy sector by duplicating the mistakes of other EU countries.

In 2014 Benedict De Meulemeester, founder and owner of E&C Consultants, published an article about the capacity market: Capacity payments: expensive solution for a non-existing problem. At the end of the blog article, a more fair, cost-efficient way without unnecessary increases of energy prices for consumers is proposed:

If you analyse both the project above and other legislation on the energy market in Poland (such as the law on the construction of wind farms) it seems like the actions of Minister Tchórzewski are exclusively focussed on supporting the Polish coal industry.

Prior to signing the “Windmills Act”, the Energy Minister said “there is a need for less of this renewable demagogy”. I would say there’s a need of less of this coal and bureaucratic demagogy.