To think that the soon-to-be world’s largest exporter of liquified natural gas (LNG) may soon become an importer may sound like a joke to some, but in fact it’s the reality we are in. So far, out of five LNG import terminals on the cards, two LNG import terminals have been approved in New South Wales, with the latest addition receiving Critical State Significant Infrastructure (CSSI) status by the state government. However, the only thing that should be receiving a critical status is the fact that Australian gas consumers, particularly the gas-dependant manufacturing sector, continue paying as much for natural gas compared to one of the historically most expensive gas consuming markets in the world, Asia. This is because large part of Australia’s vast natural resource has been exported there in very large quantities since 2015. 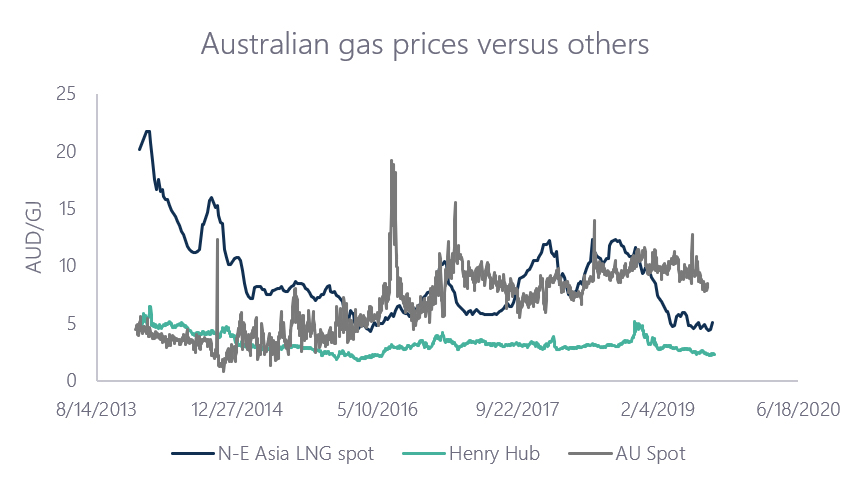 Figure 1: Australia’s gas prices in comparison to other markets

In the early years of the new millennium, a series of major coal-seam gas (CSG) reserves were discovered and subsequently contracted in Queensland. Aspiring producers rushed to label them as “cheap” unconventional resources that would bring more cheap gas to Australia as well as provide enough natural gas for the nation’s electricity market to transition away from coal. During this period the supply and demand balance was stable with prices around AU$3-4 per gigajoule (1,97 - 2,62 USD/MMBtu or 6,7 – 8,93 Euro/MWh) as the east-coast states were self-supplied through conventional gas.

Production for CSG quickly ramped up and sometime around 2012, CSG production had become important resource to supplement the domestic gas market, having attracted significant investment particularly from major producers who were also looking to export the gas as LNG to the growing Asian markets.

It all hit the fan between 2014-2015. Three LNG export facilities in Gladstone (Queensland; see Figure 3) were rapidly commissioned and opened as producers sought to exploit the growing LNG demand from Asia with their “cheap” CSG, which at the time was thought to be abundant. Unlike in Western Australia however, the government did not set gas reserve controls in the east-coast, which would prove to be a grave mistake. As a safety measure, exporters got their approval from government by guaranteeing (not formally) that there would be enough gas for LNG and domestic users. 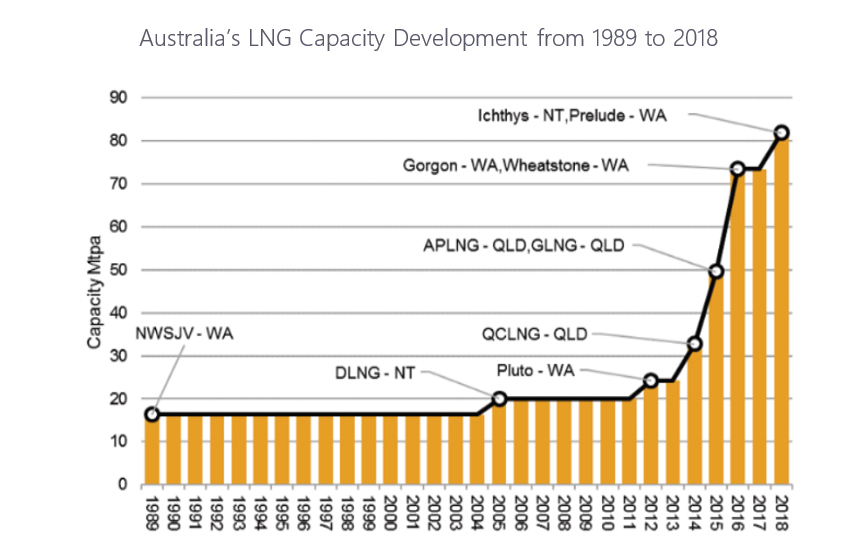 CSG production turned out to be rather expensive and production declined faster than expected, leading to higher production costs. Around this time, the Australian Competition and Consumer Commission (ACCC) found that one of the three main exporters of LNG in Gladstone was unable to supply its export plant (GLNG) from the 2P CSG reserves that it had given prior to its final investment decision. In fact, its reserves were grossly overestimated compared to its supply capacity (Figure 4). 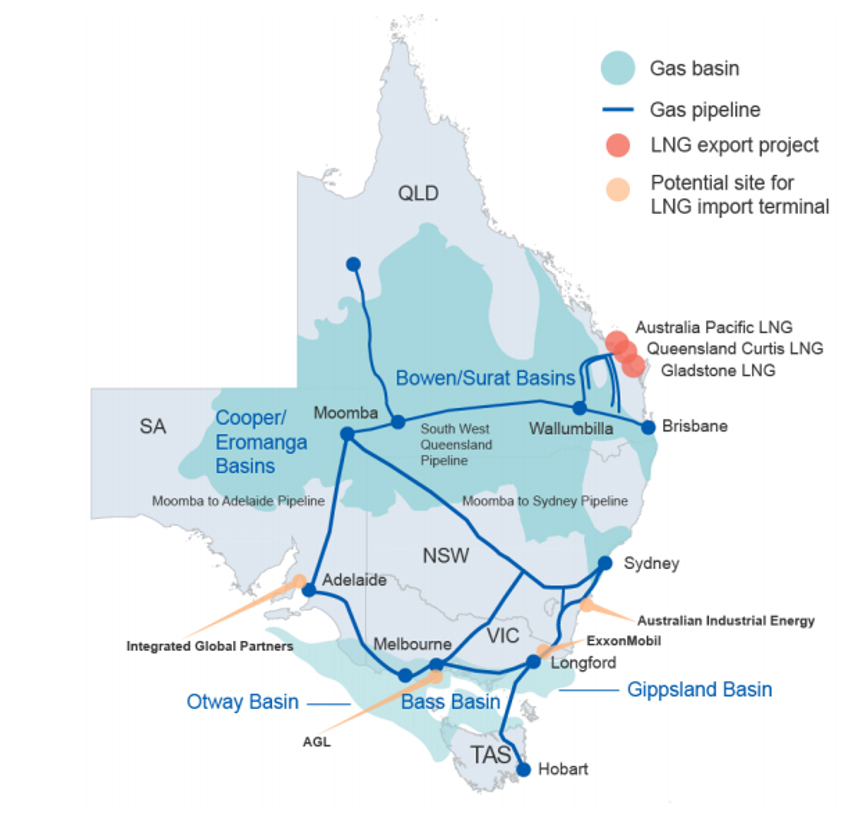 To fix this, the producer bought from the domestic market to meet export quotas, sucking up domestic gas from the southern states, something the companies had agreed not to do. A head of one of Australia’s largest retailers appropriately labelled it “a giant vacuum cleaner for the East Coast gas market”. Estimates suggest that the producer purchased 160PJ out of the domestic market in 2016, equivalent to 27% of domestic consumption, justifiably putting tremendous pressure on domestic supply. 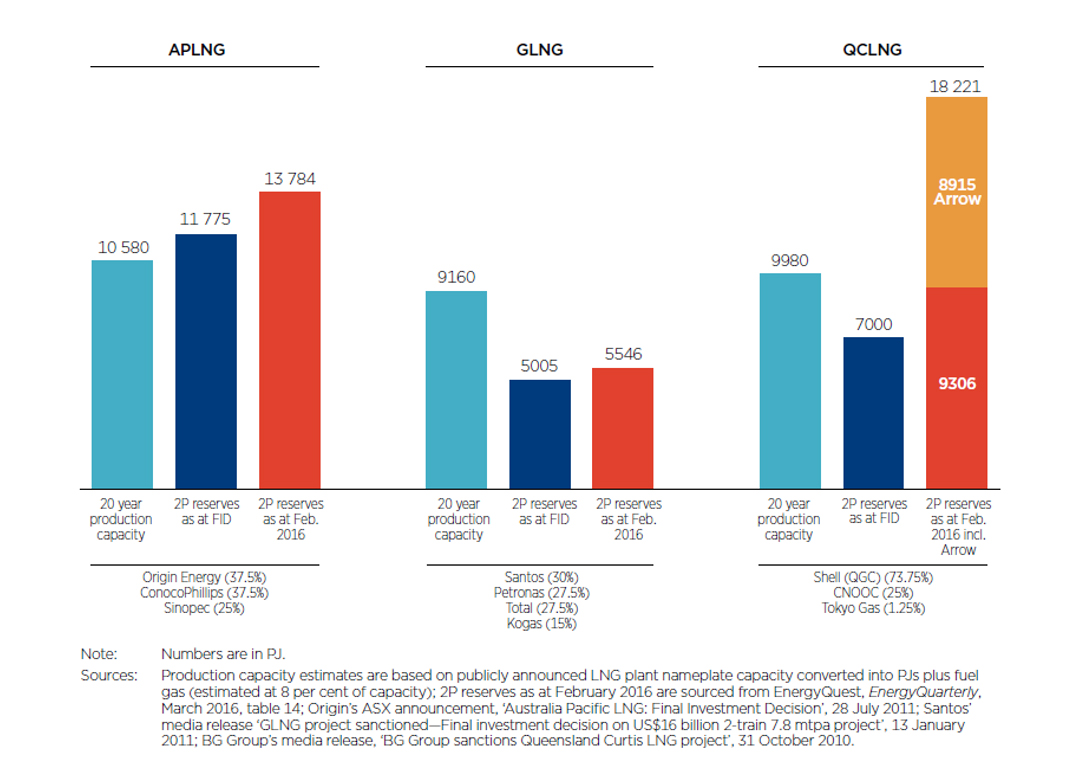 This sudden change in gas flows had a tremendous impact on gas supply and prices in the southern states, particularly Victoria and New South Wales, at a time where Victorian offshore gas production, mainly from the Cooper Basin was on a decline since the early 2000s.

Gas supply in Australia tripled, but so did prices domestically. But why? Well, essentially a ‘link’ was established between the domestic market and the international gas market, where prices were much higher than what domestic users were accustomed to.

In comparison to the transparency in the electricity market, the gas market is very opaque, making it very difficult to observe and compare prices for both buyers and sellers. There is no national wholesale market for gas, and moreover, most gas is traded bilaterally via contracts. Essentially, this lack of transparency allowed for a lack of competition. Moreover, the monopoly power of producers and pipeline owners in an already immature gas market, as well severe lack of information put domestic and industrial gas buyers at a disadvantage which helped to push prices up. 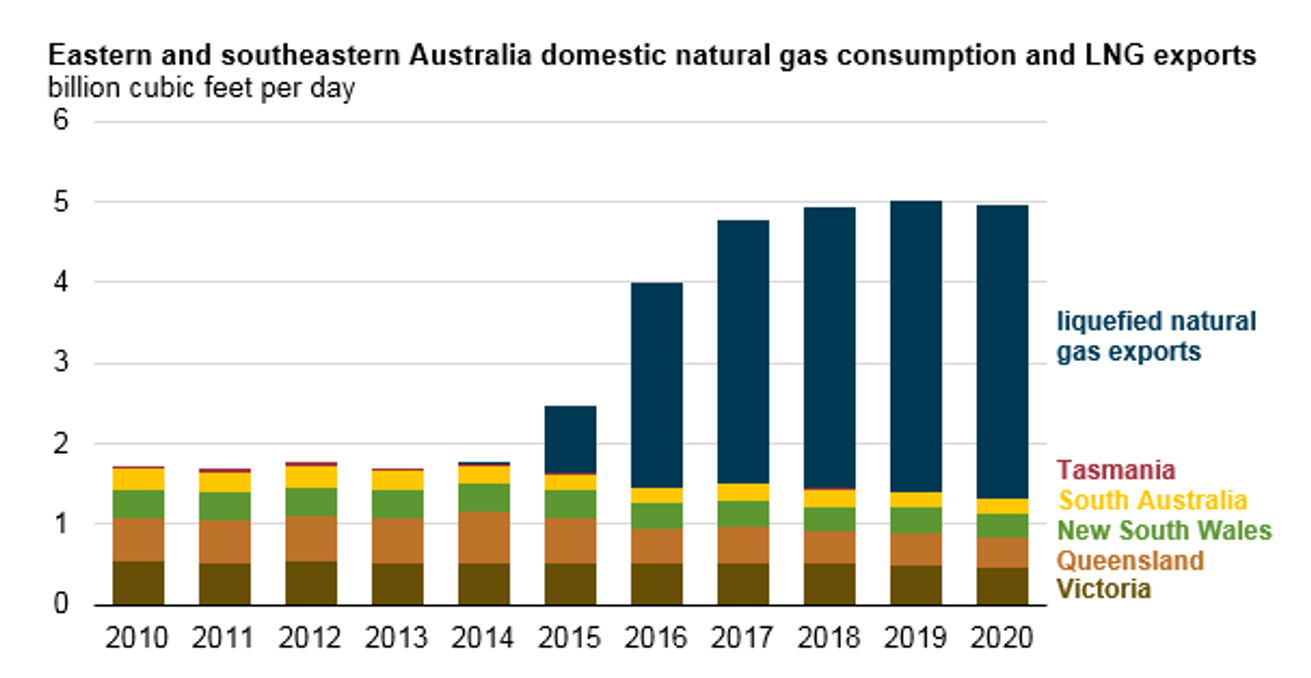 As stated by the ACCC in its gas market inquiry “the east-coast gas market became directly exposed to international oil and LNG prices via LNG export contracts, the LNG spot market and domestic contracts with explicit oil-linked pricing.” This all translated into higher and more volatile domestic gas prices. The eventual parity pricing with international markets was actually expected by the industry, what was not expected was that the unpopularity of unconventional gas in New South Wales (NSW) and Victoria (VIC) would be so prevalent that it would also lead to the states shutting down onshore exploration, preventing the introduction of projects that would boost supply. 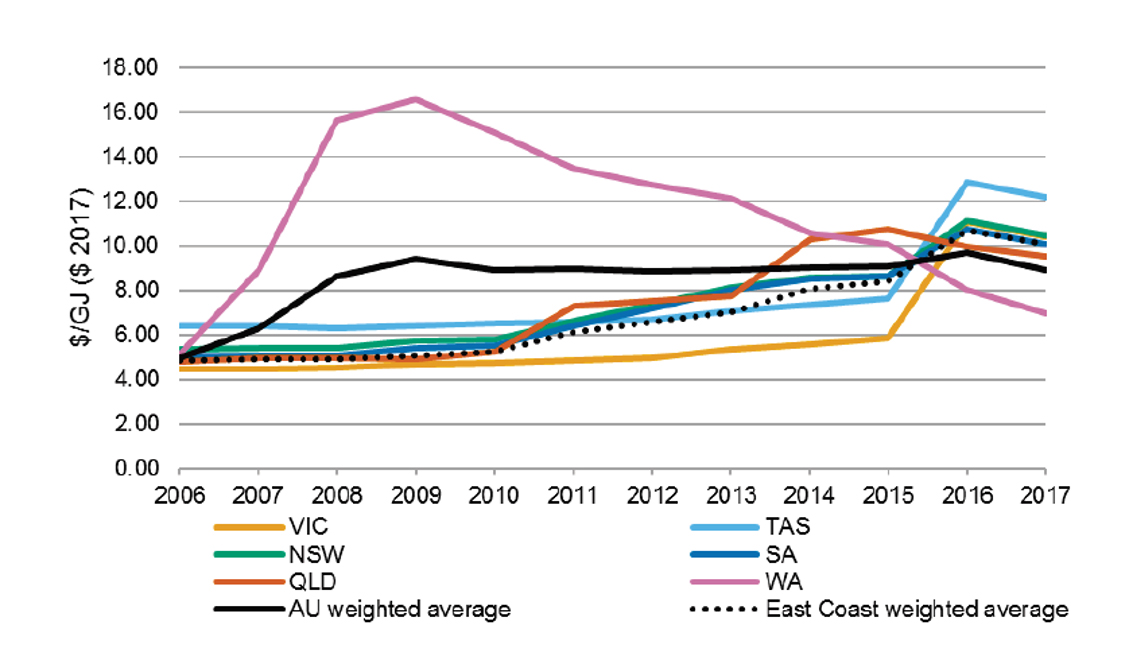 Although there’s been a lot of finger pointing in the media in the past couple of years, there is no clear culpable party and the industry is adamant on just finding a solution. Below we will highlight a few of the proposed solutions.

There’s been much debate about “supply issues” driving price, and to proponents of this argument, they are somewhat right. For example, Victoria and New South Wales both have onshore gas development bans that limits a large quantity of recoverable gas to reach their domestic markets. However, from AEMO’s Gas Statement of Opportunities 2019, it’s clear that there is more gas in the south eastern states to meet demand, and more gas is on the way.

For reference domestic demand was 431 PJ in 2018. AEMO does forecast though, that supply will tighten around 2023, as underperforming fields (mainly CSG and old basins) continue to decline in production and new gas production will be needed.

Further supply is set to come from a few offshore basins in south eastern states as well as from Queensland and the Northern Territory. As we highlighted in previous Monthly Analyses, the Queensland government continues to announce new gas tenements, released solely for domestic gas supply.

Further up north, shale gas in Northern Territory (which has lifted a ban on fracking) is seen as a potential powerhouse along with the newly built gas pipeline, the Northern Gas Pipeline (NGP), connecting Queensland and Northern Territory. 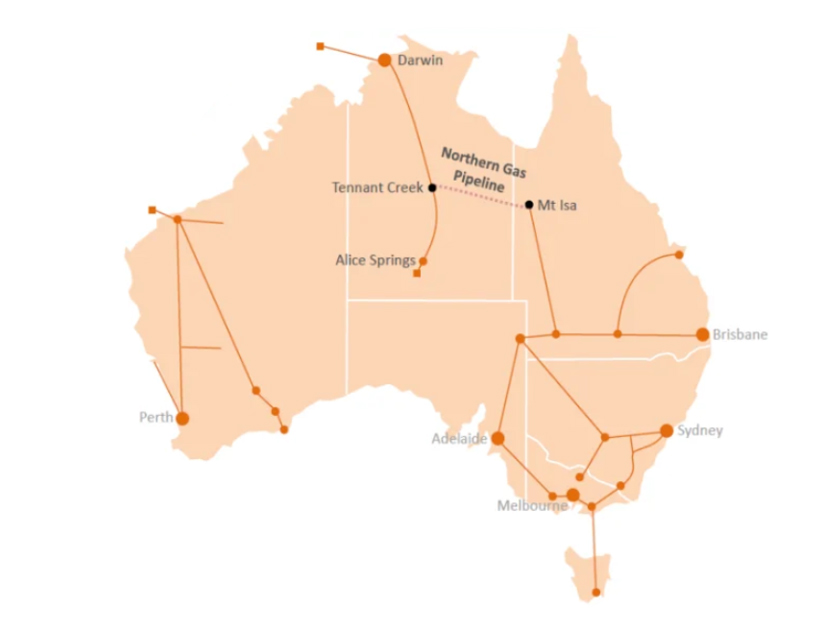 There is hope that the pipeline will help increase supply availability to eastern gas markets, particularly for New South Wales and Victoria. The issue with that is the added transport costs from NT to QLD of 1-2 $/GJ, and then to NSW or VIC which can generally range between 2-3 $/GJ.

Another option gaining traction, which seems outlandish since Australia is sitting on vast gas reserves, is the import of LNG, either from west to east or from farther offshore. Out of the five LNG import terminals, two have been approved in NSW and are set to go ahead (pending several approvals), with the aim of reaping the benefits of high-priced gas. AGL Energy is looking to import LNG to eastern Australia from around 2021 (pending development approvals), with Woodside Petroleum and Chevron (two big LNG producers in WA) expressing interest in supplying AGL’s proposed floating storage and regasification facility. LNG could also come from fields in Papua New Guinea and Indonesia to the country's north or from as far away as the United States, where the country's shale boom has led to gas exports.

If exporting the LNG created a link to international markets, importing LNG is set to strengthen it even more. The cost of transport, processing, and regasification will be factored in. Sources in the media point out that out of the two terminals going ahead, one will most likely lock in gas at a “premium” of around 12/GJ (7,9 USD/MMBtu or 26,8 Euro/MWh).

The LNG netback price which we’ve discussed in previous Monthly Analysis was intended as a measure by the Federal government and the ACCC to provide better price visibility to market participants. However, wholesale prices only followed the LNG netback price curve one the way up but failed to do so on the way down. 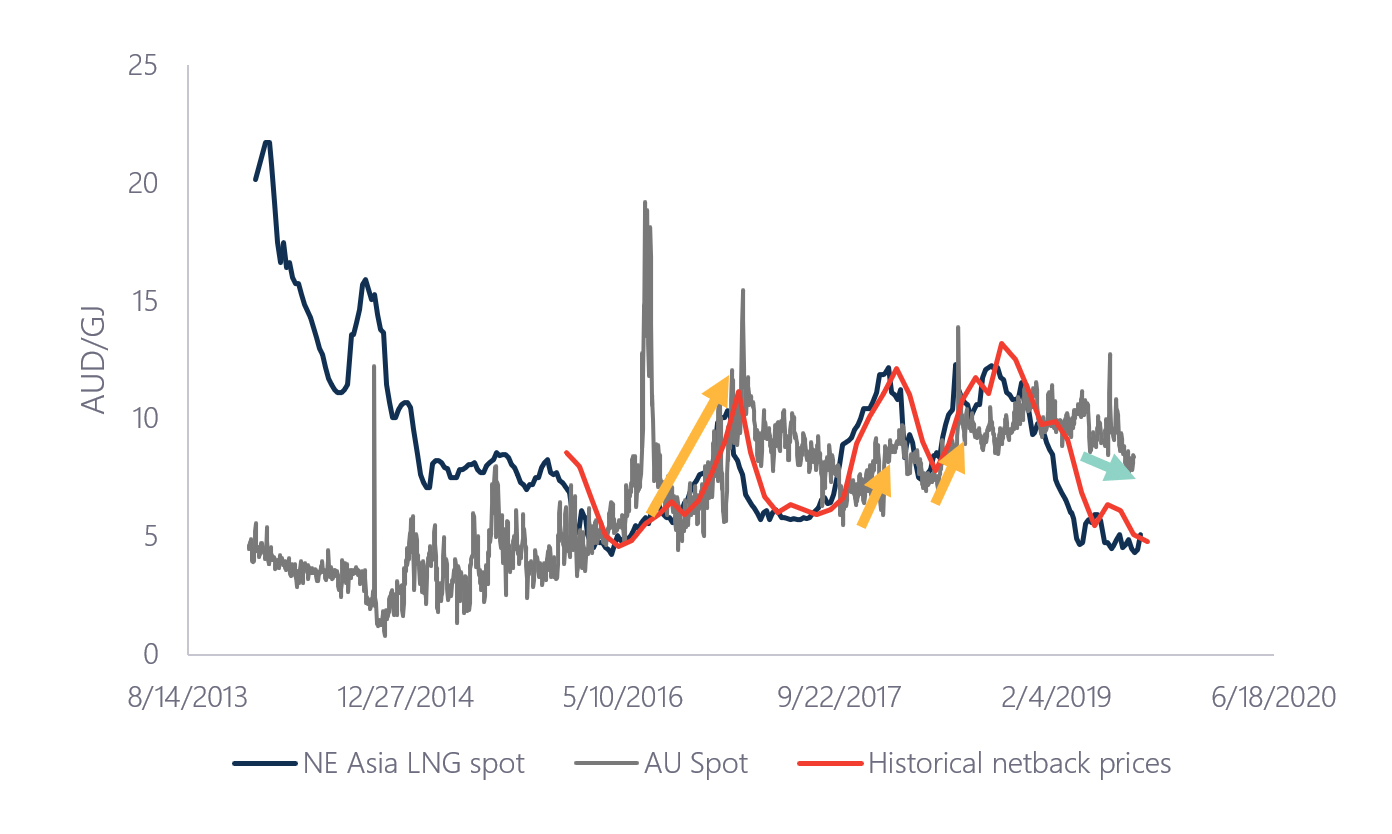 Moreover, according to the Energy Users Association of Australia (EUAA), there is a view that LNG netback pricing in fact represents the opportunity cost to the seller of supplying to a domestic customer instead of an international customer, and they recognized that the calculations behind it are flawed as it include a number of incorrectly inputted variables.

As a measure of last resort, the government can impose the Australian Domestic Gas Security Mechanism (ADGSM), which is in place to ensure there is sufficient supply of natural gas to meet the forecasted domestic demand. If LNG projects’ lead to supply shortfalls in the domestic gas market, then these projects, under the ADGSM may be required to limit their exports or find new gas sources.

Until now, only a Heads of Agreement was made between the government and gas producers in QLD, which meant uncontracted gas would be made available domestically before it is made available to the international market. This was a voluntary measure however, without any strict controls over how much was made available. But recently, Matt Cavanan (Minister for Resources and Northern Australia) who is responsible for making the decision as to whether a shortfall in gas exists, highlighted that the Australian government will not impose controls on exports of LNG in 2020 because it does not see any shortages in the domestic gas market.

Australia is currently one of the only developed nations without a gas reservation policy. In July however the Australian government gave the greenlight to fast-track a review of domestic gas arrangements and will consider establishing a national domestic gas reservation. This is something gas users have been lobbying for as prices remain historically high. However, the Australia Institute dug deeper and found that it will apply to new wells only, locking in expensive gas from these, and allowing the cheaper gas from the currently producing wells to continue to be exported.

The net result of all of the above is a crisis that clearly lacks a simple fix. Rule changes and threatening interventionalist approaches will undermine gas security. There is an inherent risk that market intervention will create new and unintended consequences, further worsening the situation. We can agree that the crisis has created a climate of deep uncertainty that is damaging investment, can jeopardize future supply, but ultimately places increases strain on the budget of large gas users.

At E&C we will continue to monitor the situation in gas prices, both regionally and internationally, and will advise and inform you regarding any future developments. 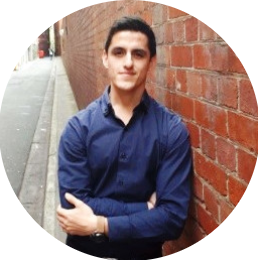 Based from our office in Melbourne and supporting our clients in Asia Pacific, Juan started out as a Geologist before moving into Renewable Energy consulting and project feasibility. He has been a valuable member of the E&C team since 2018