Understanding the security of supply risks

We’re more than halfway through 2022, a year to which future history books will add the word “energy crisis”. The likelihood of a shortage of natural gas supply next winter has increased now that Russian supplies have been cut down further and Germany has upped its alert status one step closer to the emergency level. On top of this, buying natural gas and electricity in Europe continues to cost many times more than anything we’ve seen before. This also has an upward pull on many other markets across the globe. Our consultants are busier than ever helping their customers deal with the consequences of this crisis. But they´re still willing to give us a bit of time to share their views on the issues large energy buyers have to deal with.

With the tit-for-tat economic warfare with Russia leading to more and more reductions of Russian gas exports to Europe, many industries worry about being forced to stop their activities as their natural gas and/or electricity supply gets interrupted in case of an emergency shortage of natural gas. We speak to Bart Verest, one of our long-standing Consultants who has a deep understanding of European legislation as well as risk management. We get his take on the factors to consider when there are risks to the security of supply.

What are the ways in which supply could be interrupted?

In case of a shortage of natural gas, whatever its cause, there are two possibilities of supply to your plants being curtailed:

During the summer months, Russian supply cuts did not result in shortages of natural gas and/or electricity as summer weather reduced the demand for natural gas. The European Commission also approved plans to support the filling of storages over the summer months and the diversification towards other sources of natural gas and electricity supply. Although storages are being refilled faster than anticipated, many worry that this won´t be enough for the increased demand during the upcoming winter period. And whereas a few months ago, talk about cuts in Russian gas supplies were still hypothetical, we are now seeing an increasing amount of Russian gas being cut off. At the time of writing, Nord Stream 1 has been cut completely but residual flows are still coming from other pipelines. It is therefore increasingly likely that those two options of seeing your natural gas supply interrupted will be exercised.
EU and UK gas supply portfolio by origin – 2021 (100% = 480 bcm) vs First Half 2022

How do country-wide emergency plans work?

According to article 11(1) of the European Directive 994/201, three crisis levels have been defined regarding security of gas supply:

Every member state is in line with these crisis levels and each has their own action plans which will come into play if any of these crisis levels are met. At the moment of this interview, Sweden, Finland, Estonia, Croatia, Hungary, Slovenia, Latvia, Denmark, the Netherlands, Austria and Italy have triggered the Early warning level and Germany has triggered the Alert level and is taking extra market-based measures to reduce the risk of an overall shortage.

You’re talking mostly about natural gas, how about electrical power?

Currently, availability of electricity is, for some countries, as much of a problem as gas. This is mainly the case in France, where nuclear availability dropped below 50%. But there is hope: EDF has recently projected that 28 nuclear reactors will be back online by the winter period; a step that could ease or solve France´s energy problems. History however tells us that the forecasts are usually more optimistic than the reality. On top of this, the electricity and gas trading between France and Germany will be strengthened to cushion any further problems as Macron and Scholtz agreed some days ago after a meeting between the two leaders. The French grid operator, RTE, will be announcing their winter outlook on the 14 September, which will give us a clearer picture of the security of supply in the coming months. There will also be a State of the Union address by Von Der Leyen on the same day. Some draft leaks indicate that the European Commission want to propose a plan which will cover electricity demand reduction measures to reduce peaks. 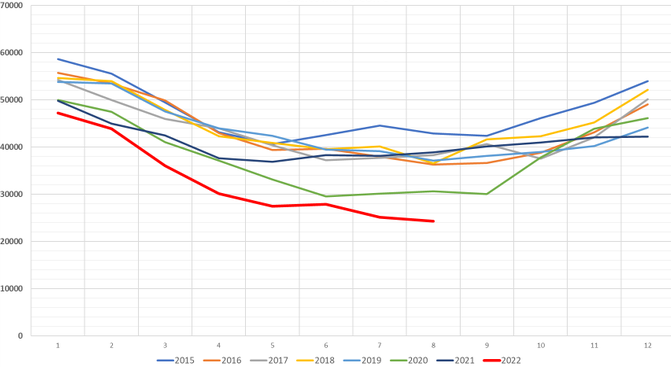 Can large energy users be protected against curtailment plans?

In general, residential consumers are protected as well as crucial infrastructure such as hospitals. Industrial users are not, with the exception of activities where you need energy to guarantee the safety of the plant, such as Seveso installations. Get informed about the possibilities of attaining protected status in emergency curtailment plans and do what’s possible to get on the list of companies that will not be interrupted.

Most industrial consumers should already have provided the correct input to grid operators on their processes over the last few months. What’s left is to wait for the updated gas emergency plans from member states (Belgium and Germany should be releasing their updates later this month).

And if they have a voluntary interruptibility arrangement in place?

If you have a voluntary interruptibility arrangement in place, take into account the higher likelihood that it will be executed (more frequently). Make an economic assessment and (try to) adapt your arrangements if necessary. I would also recommend checking your contracts carefully as from time to time we’ve encountered situations where clients were not aware of having interruptibility in place, as it was hidden in small letters or in an old utility contract. These interruptability contracts can cover both electricity and gas.

There is also a growing likelihood of gas auctions, where companies may soon have the option of switching off their natural gas supplies where they can then be compensated. Germany already has the intention to roll out such a ´gas auction model´. Other countries may consider this option as well, especially in light of the ´Save gas for a safer winter´ plan, which states (in article 15), “Member States should in particular consider economically efficient measures such as auctions or tender schemes, by which Member States can incentivise a reduction of consumption in an economically efficient manner”.

Are there alternative energy supplies that large energy users can consider?

There are a few possible back-up options: LPG/LNG, fuel oil, dual fuel burners, biogas. Hydrogen might be possible in the future but is not a short-term solution. For power: generators or batteries. For generators; make sure you have enough diesel available and look for on-site storage. Build up stocks and/or update contractual arrangements for alternative fuels.

Indeed, as you can see from the below graphs, alternative fuels are now cheaper than natural gas in Europe – a clear argument for a business case. The EU´s ´Save gas for a safer winter´ plan also includes a call to switch fuel in order to reduce demand on natural gas (Art. 6,1).

LPG and fuel oil cheaper than natural gas in Europe

Is there anything else large energy users can do to protect themselves?

Well, first of all, don’t allow yourself to be surprised. If ever there was a moment at which it’s highly likely that an overall shortage and supply interruptions to industrials occur, it is now. We´ve already helped many of our clients to prepare a contingency plan for each plant so that they know exactly what to do when they get that message that the plant will be shut off. If you don´t already have a plan in place, the best time to prepare one is today.

If you have access to alternative supply, make sure you’re ready to fire it up. Identify which parts of your plant can keep running and which ones have to shut down. Take all necessary measures so that you can shut down in an orderly, safe manner.

Develop those plans and run tests so that everyone knows exactly what to do. Anyone saying at that moment, “I didn’t know this could happen” or “I don’t know how to deal with this” hasn’t done a great job. Don’t allow people in your organization to stick their heads in the sand, saying that it’s not going to happen. In a very worst case, there could be a shortage of supply for the whole of Europe. It’s much more likely however that some countries will be affected and others not.

The three-step triggering of the emergency plans indicates where the risk of interruptions is highest. Therefore, as part of your contingency plan: check in which plants/countries you can move production. For electricity, on-site renewable generation could replace the offtake from the grid, but this will only cover limited amounts. Combining on-site renewables with batteries can further enhance your possibilities of keeping (parts of your) plant supplied with electricity during a power shutdown. Many customers have already done their homework on these contingency plans, but if you haven’t, it’s definitely not too late.

The next dates to highlight in your agenda are 9 September, when the 27 Energy ministers will meet and government interventions will be discussed, and 14 September, when Ursula Von Der Leyen will give her annual State of the Union address and more interventions into the energy market are expected. We will continue to send out updates on the back of these changes – and any other country/region-wide initiatives that may have an impact. To keep updated on these changes, we recommend registering for our newsflashes.