Why you could and shouldn't blame China for higher gas prices

It should come as no surprise that China faces a big environmental threat in the form of air pollution. In 2016, 58% of the country’s power was generated by coal-fired plants. Millions of households still use coal stoves for heating. The average density of fine particulate matter (PM2.5) in 338 cities across China stood at 43 µg/m³, Beijing received an average annual dose of 58 µg/m³. To make the comparison: the EU air quality standards maximum stands at 25 µg/m³.

To combat this threat, Beijing has included a structural reform on energy in its 13th Five Year Plan (13FYP). The pillar of the energy policy in this plan, stretching until 2020, is the “Dual Alternative”, specifying the switch from coal to natural gas and from fossil fuel energy to non-fossil fuel energy. The contribution of renewable energy should rise to 15%, while the natural gas rate should rise 3%. Coal will still play a big role, due to China’s self-sufficiency rate of 90% and the cheap price. Although no Five Year Plans are setup for the 10 years after 2020, the IEA expects an even stronger switch rate. The Chinese energy revolution is ramping up and yes, it will affect the rest of the world. 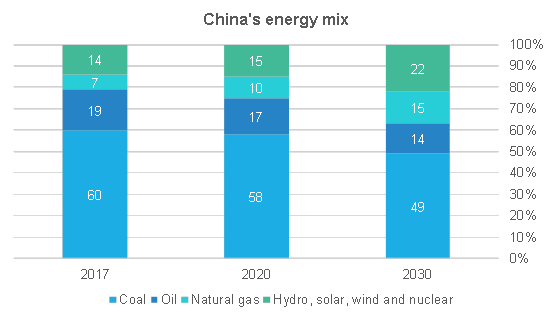 In this article we will mainly focus on the impact of this reform on the gas markets worldwide.

Considering the high amount of coal generation that should be replaced by natural gas, the first challenge we see is the difficulty for the gas supply to catch up with the increasing demand. This was already visible in the first few weeks of December 2017, where a shortage of gas left millions of households without heating. A gas storage capacity of only 3% of the country’s consumption further exaggerates this problem.

The gap between gas consumption and output is expected to rise in the coming years. 13FYP expects a 53% expansion of the domestic production, while the demand could rise more rapidly. The gap can be tightened in two ways, either LNG or pipeline imports.

It will probably take a combination of these two possibilities to solve the problem, but both options contain inert restrictions. The last quarter of 2017 showed pipeline and especially LNG imports massively increased, but it will be hard for China to continue at this pace. 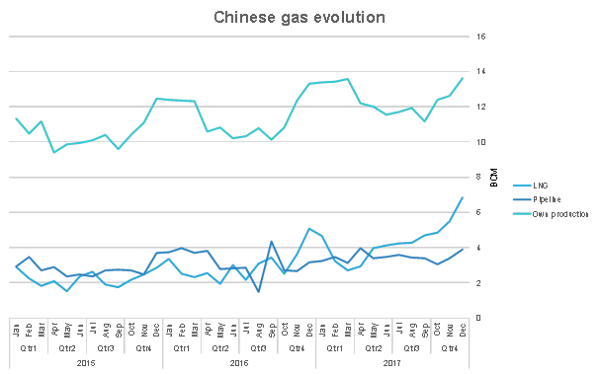 A total capacity of 72 Bcm/year of pipeline imports is currently active, delivering natural gas from Central Asia and Myanmar to China. Three more pipelines are currently planned or under construction, adding 98 Bcm/year of imports in the next few years. One more line is added to the Central Asia-China gas pipeline and two pipes will connect Russia to China. As of right now, the import pipelines arrive in the western part of China, while 94% of its population lives on the east/south-eastern part. The West-East Gas pipeline is a solution, but its clear that LNG cargoes arriving on the east coast makes more sense geographically. China’s 17 liquification facilities, with a total capacity of 61,1 million tonnes/year, received 37,9 million tonnes of LNG in 2017, a 48% growth in comparison to 2016. China overtook South Korea in terms of LNG imports, leaving only Japan to beat. If China would linearly increase its LNG imports, gas prices in Asia would increase, leaving less incentive for exporters to ship to Europe. There is however a diminishing return, as the current Chinese LNG infrastructure is not equipped to handle the strong increase. 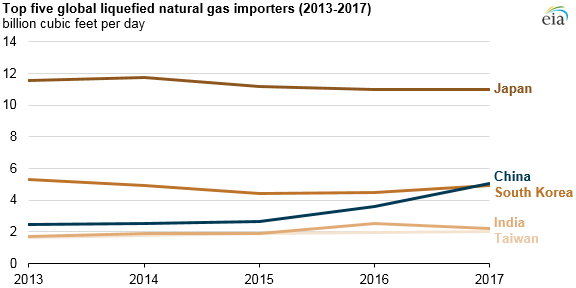 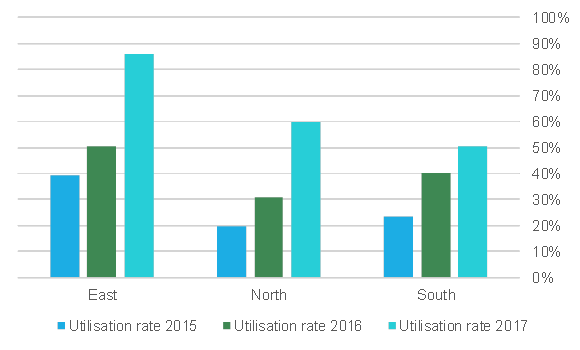 On average, the 2017 utilisation rate stood at 60%. This is however calculated over an entire year, in winter periods the stress on LNG terminals is higher than in summer periods. Q4 2017 reveals a terminal utilisation rate of 76%. Three new LNG terminals due to start up in 2018, delivering a total capacity increase of 7,8 million tonnes/year, will probably not sufficiently relieve the pressure. 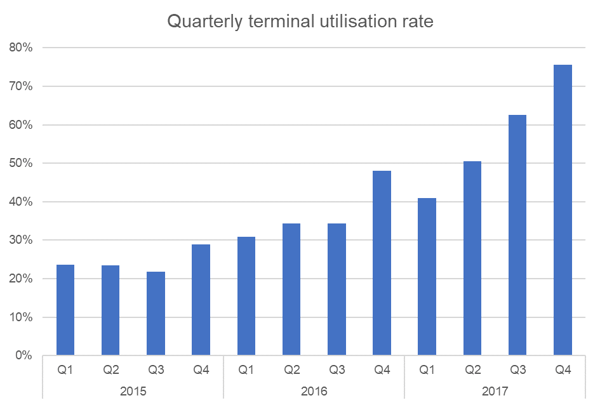 A strong rise in demand in a country as influential in the world economy as China is bound to be reflected in the LNG wholesale markets. To better understand the effect on the European markets, we should analyse this from a Qatari viewpoint. Qatar is still by far the largest exporter of LNG, with a total export of 104,4 BCM according to BP. It was accountable for 30% of the world’s LNG import, 42% of Europe’s LNG import in 2016.

Although most LNG contracts are still long-term, ensuring a steady supply and reducing volatility in the market, about 25% of all deliveries are on spot and short-term. This means that a non-contracted cargo shipping from Qatar can decide to go East or West. The choice will be made by calculating the netback, which comprises of the price of natural gas in the destination country minus the costs of transporting the LNG.

The graph below shows the waterborne landed prices, which is the price received for delivering the LNG at the terminal, for UK and China.  The orange and purple line represent a simple, 12-month moving average for respectively UK and China.  We can extract two pieces of information from this chart:

The second part of the equation is the freight cost of LNG towards either Europe or Asia. The Oxford Institute for Energy Studies has calculated this cost for LNG tankers with a steam turbine propulsion system (ST) and a dual fuel diesel electric propulsion system (DFDE). DFDE is more efficient, since the natural boil-off of LNG is enough to reach an average speed of 19 knots, whereas ST needs forced boil-off to reach 14 knots. Existing ST vessels still account for 60% of the active LNG fleet, but will be replaced by the DFDE variant when their time has come. The total price will strongly depend on the charter costs and fuel costs. A strong rise between July and December 2017 was noted, which is why the Oxford Institute has made the calculation twice.

The average transport cost in July from Qatar to UK was $ 0,86/MMBTu, Qatar to China $ 0,60/MMBTu. In December this was $ 1,29/MMBTU and $ 1,04/MMBTu respectively. Although the prices have risen for both countries, we can see that the premium has barely changed. It’s still $ 0,25/MMBtu cheaper to transport LNG to China than to the UK. Reuters sees an even larger difference, again in favour of China.

A lower transport price combined with a higher price when delivering makes it obvious that most of the spot LNG cargoes from Qatar go East. The lower transportation costs mean the European gas prices will need to trade at a premium to be competitive with Asian markets.

The U.S. and Australia could lower the pressure

Solely based on this information, we could start to panic that this will drain the LNG flows to Europe. If only it was that simple. The LNG market is a highly mobile complex of communicating vessels, where a drain of one supply point could tilt another exporting country to change directions. Both Australia and the U.S. are ramping up the production capacity.

A large wave of export investment projects is set to finish in the next few years. The recently finished Gorgon project with a capacity of 15,6 million tonne LNG per year is ramping up exports, while Wheatstone (8,9 mtpa), Ichthys (8,4 mtpa) and Prelude (3,5 mtpa) are nearing the end of construction phase. Total annual exports already rose by 26% year-on-year in 2017, with even a 40,5% increase in exports to China.

China is Australia’s second-largest LNG market and Australia is China’s biggest LNG supplier. The low freight cost to export to Asia causes a netback difference of about $ 1,6/MMBTU between China and the UK.

The recent addition of Cove Point (5,5 mtpa) to the already existing four trains at Sabine Pass liquification plant (18 mtpa) is the first step in a wave of LNG exporting terminals due to come online in the next few years. If all projects continue as currently planned, 35,79 mtpa of extra capacity could come online by 2020. Main eyecatchers are the three trains at Cameron LNG terminal (13,50 mtpa) and Freeport (11,57 mtpa).

According to the IEA, the U.S. could become the largest gas exporter by 2025, even pushing Qatar out of pole position. Despite the solid short-term efforts of Australia, a lack of second-wave projects means it probably won’t compete for the top spot. We can see that the total capacity of LNG liquification plants will rise in the next few years, increasing the supply side of the equation.

So where are we heading at?

It’s clear that the way China tackles the air pollution by swapping coal for gas and renewable energy without supportive infrastructure is causing headaches. Domestic production and pipeline imports are stagnating, leaving the solution to LNG imports. Since LNG is flexible and can be delivered nearly anywhere in the world, we should keep a close eye on these evolutions in China.

The LNG imports in 2017 increased 48% year-on-year, overtaking South-Korea as the second largest LNG importer in the world. A high demand, combined with low storage capacity caused seasonally high spot prices. High average prices in the Asian markets keep attracting LNG cargoes from Qatar, reducing the supply in Europe. European gas will need to trade at a premium in comparison with Chinese gas prices to attract cargoes from Qatar, due to the difference in freight rates.

Strong Chinese demand is likely to continue to put pressure on LNG prices, but some diminishing factors should be noted. An already high utilisation rate could keep a damper on the big LNG demand in China, relieving some pressure from the European gas prices. The issue mainly exists in the north and eastern part of China, while the southern part has some capacity to spare. It will take a large infrastructure investment to fully experience the big growth in Chinese gas demand. Moreover, a substantial amount of LNG liquification terminals in Australia and the U.S. should come online in the next few years. If all planned and started projects in the U.S. finish within the next four years, U.S. could overtake Qatar as the largest exporter of LNG. An oversupply to the Asian market could theoretically lower the netback delta between Asia and Europe.

Attend our session on "Bullish markets and how to survive them" at our Transatlantic Energy Conference. Book your ticket using the promotion code BLOG and receive a 10% discount: www.eecc.eu/TEC 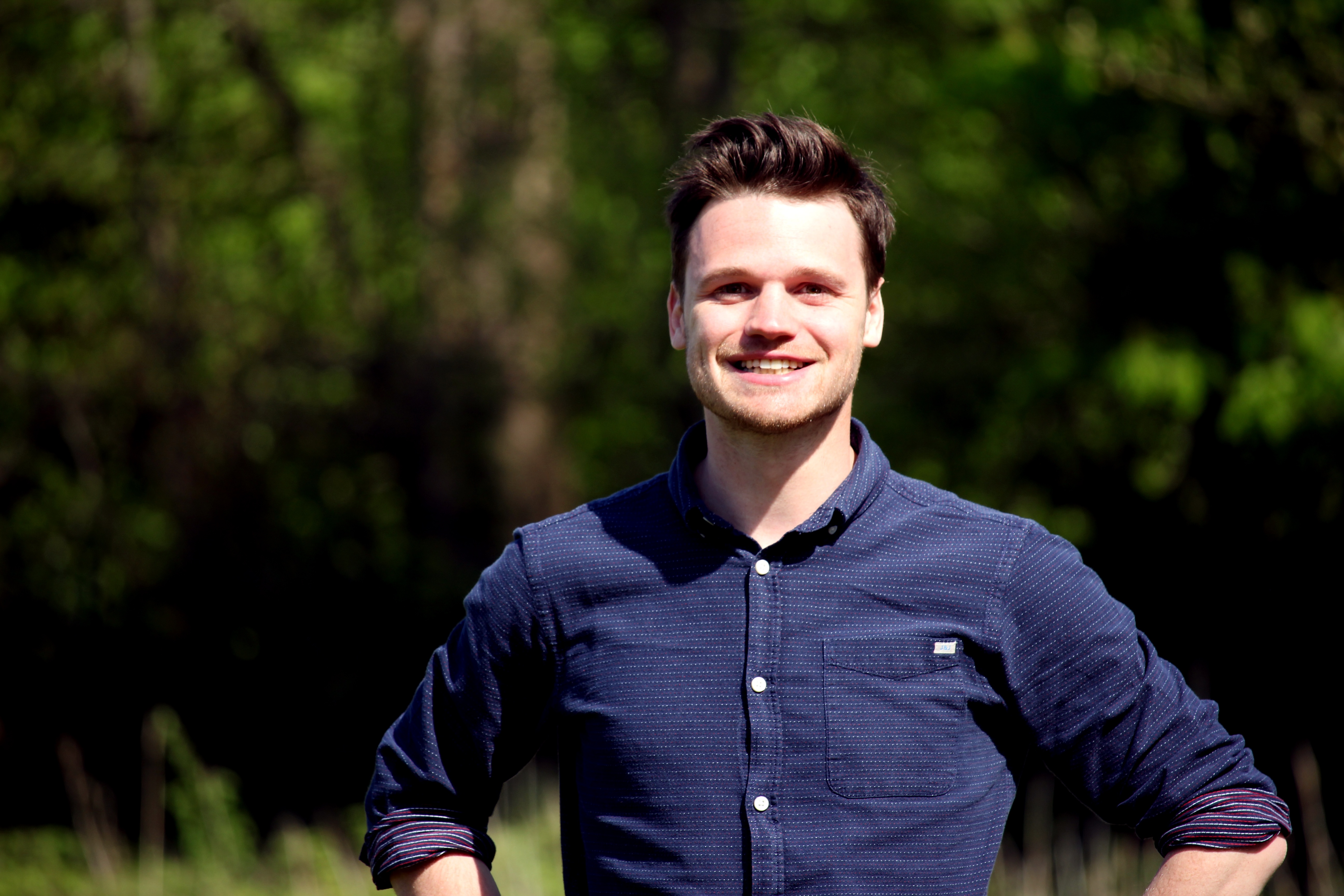