I’ve just finished the book “The Colder War” written by the Canadian energy market investor Marin Katusa. The book is full of admiration for Vladimir Putin, the President of Russia. It is also clearly impressed by the oil and natural gas sword so eagerly waved at the West by Putin’s Russia in what according to the title is an economic warfare against the United States. In awe of Russia’s formidable reserves, the author believes that Russia will win that war, leading to the demise of the dollar as the currency for paying energy in the world markets. This will uproot the world’s economic order.

It's easy to get impressed by Vladimir Putin’s personality as a strong world leader. The way that he restored Russian self-confidence after the embarrassing Yeltsin years is remarkable. And no one can deny his great intellectual powers. Moreover, as Western democracies are struggling through crippling election contests followed by chaotic leadership, the strong authority of Putin’s presidency is appealing to many (not to me).

Russia holds 6,4% of the world’s oil and a staggering 17,3% of the world’s reserves in natural gas. That puts the country in an envious position of potentially gathering gigantic amounts of dollars through the production and sales of these commodities. However, I believe that this economic power is over-estimated. There is an abundance of historical evidence that economic wealth purely derived from the sales of commodities does not lead to world dominance.

The hegemony of the British empire or the US or the new role for China in this world, they were and are based on their economy’s power to create real added value by transforming commodities into products and services and not just selling to the rest of the world what is found in the underground. Software company Microsoft is heading for total net profits of 23,09 billion dollar this year. In comparison, Russia’s gas production giant Gazprom will make 13,43 billion dollar.

And even when it comes to production of energy, Russia is not really delivering on its eternal promise of becoming the world’s main producer. As you can see from the graphs below, in the last decade the US, with its much lower reserves, has actually completely outpaced Russia in oil ánd natural gas production (Source; BP Statistical Review): 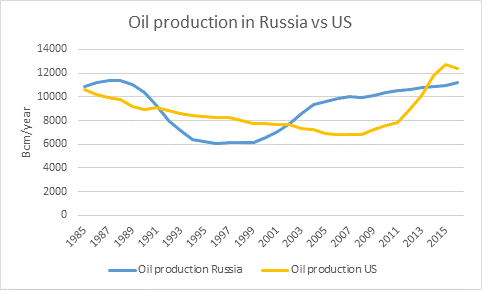 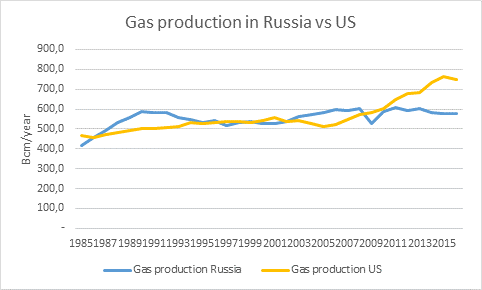 Exploiting your large reserves on a global scale would mean that your share of the world’s production grows. This is not the reality for Russia. In 1990, Russia produced 30,04% of all the world’s natural gas. In 2016, this share had almost halved to 16,31%. In that same 2016, the US was producing 21,1%. For your information, the US holds just 4,7% of the world’s natural gas reserves, compared to Russia’s 17,3%. So despite all the confidence in Russia’s huge reserves and strong-arm energy politics, the empirical reality is that it is losing market share.

Why is Russia failing to realize its promise of energy wealth? Because economic development cannot be politically dictated. On the contrary, it seems to prosper mainly when politics withdraw from the markets and allow the forces of free enterprise to take over. This is very clear when you analyse the history of the development of shale gas and shale oil in the United States, a strong example of how free initiative can drive technical and economic revolutions.

One of the reasons is that politicized corporations such as Russia’s Gazprom, sitting on the world’s largest natural gas reserves, tend to waste money and underperform. In the past five years, Gazprom made a cumulated net profits of 123 billion dollar. The US’ largest oil and gas company Exxonmobil made 147 billion dollar (Source: ycharts.com). Which means that Exxonmobil made almost 20% more money. And Gazprom, that is 66% of the gas production in Russia whereas Exxonmobil produces just 4,26% of all US natural gas. So, it’s clear that the more diversified, competitive and open market in the US is resulting in more profitability and more investment in new production. And that explains why the US, with more limited reserves of gas that is moreover trapped in the challenging shale layers, can so easily outperform Russia with its massive conventional gas reserves.

Smart Vladimir Putin seems to realize that and Russia has recently embraced more liberal energy policies. We’ll have to see in the next years if this results in more Russian gas production. But even if it does, whether this leads to a restoration of Russia’s market share will depend on whether the Russians are willing to adapt a free market approach when trying to sell that gas to the world.

In the last decade, we’ve seen the gas markets in Europe going through a deep transformation from long term oil-indexed contracts towards the more open Hub or better gas-to-gas model. These Hub markets make much more economic sense. The price is determined by the laws of supply and demand of gas itself. The market is easier to operate and more accessible, which leads to more competition. As a result, gas prices for end consumers have dropped dramatically.

The Russians have always strongly opposed this evolution. Their competitors in e.g. Norway adapted quickly and indexed their contracts to the new prices on the Hubs while the Russians held on to the oil-indexation and take-or-pay conditions of their old contracts. Their flailing customers, European mid-stream clients of Gazprom, had to take them through arbitrage procedures before the Russians were willing to acknowledge the new market reality. Yes, Russia has an important market share of the European gas market. But that’s not to the benefit of the European gas customer. Russian gas is invariably expensive. And Russia has proven again and again that it’s a tough partner in terms of negotiating conditions.

At the time of writing these words, the Russians’ market share in Europe’s is increasing again. This is due to an increase in demand thanks to good economic performance and a shortage of LNG due to high consumption in Asia. But what do we see again? That – and I don’t know what is cause or effect here - the Russian gas comes at a moment that prices are higher.

Confident that their huge reserves make them indispensable, Russia has continued to negotiate politically brokered pipeline deals. An example of that is the Altai gas pipeline that is to bring Russian gas into China. When it was announced, many European observers panicked that this pipeline would put Europe at the mercy of a Russian gas bear that could choose whether to send its gas West or East. This ignored:

The panic in the West over the pipeline to China, shows how much we are over-estimating the power of Russian energy politics. Vladimir Putin, who famously wrote his university thesis on the topic of using Russia’s energy wealth in the geopolitical arena, must be smiling. But I’m sure that he is clever enough to see that from an economic point of view, there is no reason for blowing the trumpets. The reality is that Russia has just 19% of the world’s international gas trade. It’s plunging its money in expensive, time-consuming pipeline projects entangled in political controversy. At the same time, it’s missing out on the global LNG revolution, having just 4% of the world’s LNG trade. Therefore, if what is happening in the natural gas markets is really a new version of the Cold War, then the data is showing that Russia is losing it. Data, that unfortunately is surprisingly absent in Mr. Katusa’s book.

Instead of a disappearing petrodollar, we see that the dollar is becoming more and more the reference currency for the globalizing natural gas trade. More and more deals for bringing gas into Asia are based on the US Henry Hub reference. Russia’s lack of investment in LNG exporting capacity is making it lose this terrain on which it should normally win that colder war, if reserves were the most important ammunition.

(Most of the data used in this blog article has been sources in BP’s statistical review.)