Working with big energy users in the midst of this energy transition, we sense the momentum for decarbonization. We have helped many of our clients realize their sustainability goals. Right now, one of our clients – let’s call them Client X – has just formulated their decarbonization targets and is in the process of negotiating PPA agreements. Always an exciting moment, but signing the agreement is by far the last step. This blog is aimed at demystifying the activities a company needs to consider once a PPA agreement is in the bag.

Signature of PPAs has an important impact on a company’s energy procurement activities in all its aspects. Namely: energy contracting, risk management and data management and financial controlling. We go into each of these aspects in more detail below.

Many clients have a relatively simple contract situation at this moment with all their sites in one country supplied through one electricity contract. Going through your corporate energy transition, you’ll find yourself in a much more complex contractual set-up:

The factory of the future 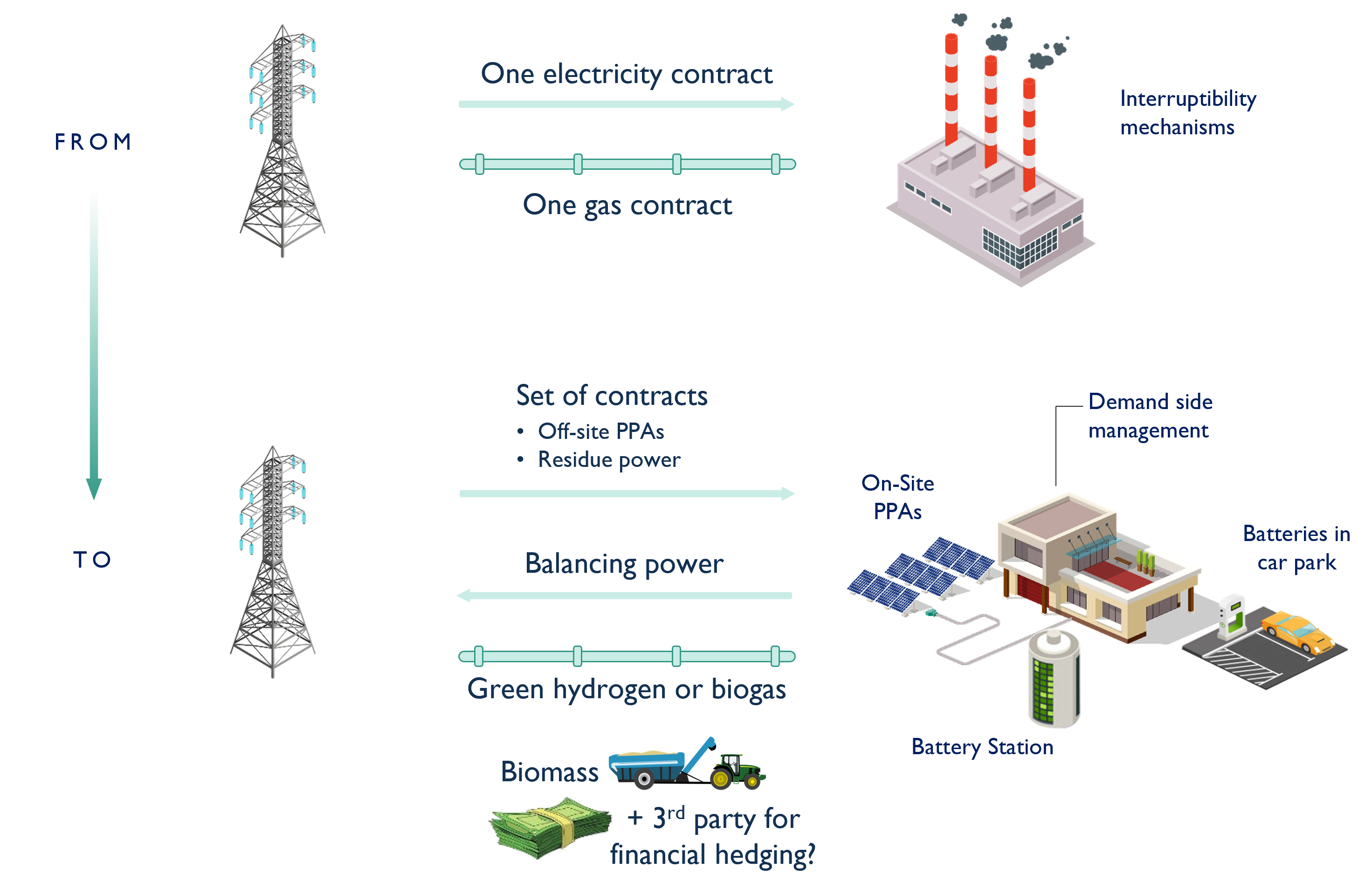 In the current situation, Client X is subject to a relatively monolithic energy price risk:

On the non-commodity part, Client X’s risk exposure remains largely the same since most of its incoming energy will keep flowing over the public grid. There might be some new risks associated with the injection of energy into the grid, in case of on-site production or usage of batteries. In the case that Client X engages in demand side management programmes, this will also entail specific regulatory risk.

The main change in terms of risk management needs, however, will be on the commodity side. Introducing PPAs in its supply mix will subject Client X to some completely new risks:

This risk is not to be underestimated. E&C made some analysis for Client X where we matched a production pattern of a solar PPA in Spain for 100% of Client X’s volume in Spain with Client X’s Spanish consumption profile. The result was that only 26% of the total volume of energy transacted was produced and consumed volume. Which means that, contrary to the popular belief that PPAs lead to more price stability, in reality they lead to a larger exposure to spot market volatility. Moreover, this spot market volatility risk could be increased by the expansion of renewable energy that should result from the current boom in PPA requests from large corporates. This means that you could be structurally short in energy during hours when there is no wind and/or sun, hence exposed to high spot prices, and structurally long during hours when there is a lot of wind and/or sun, hence having to sell the excess electricity at low spot prices.

On top of that, buying 100% in a PPA is an illusion. First of all, the amount of electricity produced with windmills or solar panels over a year is never exactly the same. Secondly, entering into a 10-year or 15-year contract; it’s impossible to predict exactly what you will consume in that period. This means that your three volumes will also continuously change from year to year, where for some years you’ll be more tilted towards the long side, and other years you’ll be more on the short side.

For all the risks cited above, risk management practices can be put in place to reduce the risk exposure. Some of those are up-front. This means that you diversify your PPA purchases over different PPAs to reduce the overall risk exposure. You can do this in a clever way: by applying spreading over technologies, geographically and in time. This will reduce the risk exposure but not completely eliminate it. Therefore, post-signature, risk management needs to be put in place. Client X is a budget risk client, meaning that the first goal of their energy procurement strategy is to stabilize energy costs over the long-term (see risk profile table below), these are in order of potential impact of the risk management practices that we recommend they put in place:

As you can see, setting up adequate risk management after PPAs have been signed will mean that more sophisticated hedging practices are to be put in place. This can be intimidating. However, any company in this position should consider that the complexity does not originate in the instruments to manage the risk, but in the more complex character of the risk to which it will be exposed when signing PPAs. The problem is not the seatbelt, it’s the risk of a car crash. Without appropriate risk management practices, Client X will completely lose control over its energy spend and be exposed to considerable spot market risks.

In the more complex procurement situation that will be created by signing PPAs, it will become impossible to read what you consume and what you pay from a single electricity bill. Determining consumption and cost for a site will demand the reconciliation of different invoices: the PPA invoice, the price at which power was sold to the grid, the price at which extra volumes were bought, and the hedges that were performed on different components. In a more advanced stage of the energy transition when more on-site production, batteries and/or demand side management programmes get blended into the mix, the number of parameters to be factored in will become even larger. At some point, this reconciliation will have to be made on an hourly level as contracts are cashed out over the spot market.

This data management aspect doesn’t ask for adaptations to the energy procurement strategy. However, we want to mention it here as it will be an important element of making the strategy work and to enable you to keep making good energy procurement decisions.

Want to understand what other decarbonization factors to consider?