How will we consume energy in 30 years (and how will we pay for it)?

Time and again I have screamed on this blog that I really don’t believe in forecasting. Therefore, this piece of energy futurology might come as a surprise to many. So allow me to start this article with a disclaimer. What I am writing here is an attempt at understanding current trends in the energy world. And an attempt at imagining where those trends could lead. It’s giving you some food for thought as this year nears its end. But please don’t shoot me if the future proves me wrong.

The main trend that we are seeing is the renewable energy revolution. Despite the continuing army of disbelievers in these technologies, the spread of renewables as our favourite source for producing electricity continues. In 2016, more than 70% of all investments in new power production was in renewable technologies (Source: International Energy Agency). The two most prolific technologies at this moment are wind and solar. In 2016, they produced 5,21% of the world’s electricity. That might seem tiny, but ten years ago, in 2006, this was only 0,73%. Solar and wind are showing exponential growth rates: 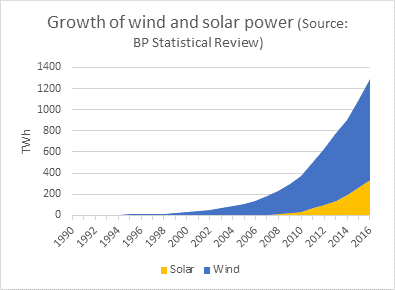 According to many articles, we can produce all the electricity that the world needs with solar power only, see for example Forbes. How soon we will reach this 100% renewable energy goal will depend on:

A continuous exponential growth is less unlikely than it might sound. Renewable energy still has the reputation of being expensive. It is true that in the last decades, countries such as Germany, Spain, Italy, Belgium and others handed out large subsidies to wind and solar power projects. And that in these countries this is visible in the bills of the end consumers in the shape of expensive renewable energy contributions. Theorists always said that the subsidies were necessary to jump-start the solar and wind industries. That they had to create the kind of mass demand and production that developed the economies of scale that allowed windmills and solar panels to be produced at a reasonable cost. And indeed, we have seen that the cost of these renewables are on a declining curve – as we can see in this article of ExtremeTech:

Honesty demands us to acknowledge that this declining trend seems to be levelling out. However, the more interesting observation is that in many countries these technologies have now reached the so-called grid parity. This means that for many consumers, producing your own electricity with a windmill or solar panel is less expensive than consuming electricity from the grid. This is especially interesting for households, which pay a lot more for grid energy due to higher prices for grid usage and taxes. That opens up a lot of potential for solar panels that are easy to install on every house’s rooftop. Larger scale projects such as windmills or solar farms could be supported if more governments foster PPA concepts such as the ones we see in Brazil, where individual consumers can buy electricity directly from renewable energy projects and get a discount on grid fees and taxes.

Even if we manage to produce 100% of our electricity with solar and windmills, we are still not a carbon-free society, as we continue to fuel our cars and industrial processes with fossil fuels. As far as mobility is concerned, the switch towards electric cars seems to have started, although a lot will depend on further evolution of battery technology, on which I’ll say more later. The big problem is the replacement of fossil fuels for producing heat.

In some countries such as the Netherlands or Germany, we’ve seen experiments with the production of green gas, e.g. from landfills, but it is clear that we can never bring together sufficient quantities of organic material to make this a substitute for all the natural gas that we’re using. We are therefore seeing clients now that are switching their steam production to electric heating because it’s so much easier to green your electricity supply. Although it’s questionable whether with the current production mixes and systems for greening your electricity supply this really results in less carbon in the air, it might be a model for the future if and when we’ve reached the 100% renewable electricity mark.

I have always been surprised by the slow development of batteries. We all hold a device in our pockets now that is a real marvel of technology: our smartphones. It allows us to communicate and interact in a myriad of manners, to take pictures, scan things, look up any piece of information you need, it guides you to whatever place on earth you want to go to, keeps track of your health, etc. But it’s energy technology seems medieval, as we have to plug it in after a few hours of intensive usage.

The transformative potential of having better batteries at our disposition can hardly be overestimated – I will name just a few:

If cheap batteries with a high energy density becomes a reality, we will all start acting as power storage banks. By adding information technology to the grid and the devices that we connect to it, we will continuously exchange electricity between the batteries of our cars, phones, laptops, fridges, etc. and the solar panels on top of our houses, the offices where we go to work or the malls where we go shopping (if we’re not doing that online only of course) and the grid.

Oh, and don’t worry, the physical and economical aspects of this will run automatically. Don’t underestimate how smart the world is getting: my Iphone looks into my agenda in the morning to tell me when I should leave home and the plug-in hybrid car that I’ve just ordered will look at the destination I’ve entered in the GPS system to calculate when to use the electric engine for optimum consumption. In the same fashion, your devices will calculate reserve levels and when to buy and when to sell without your intervention.

During hours of high production and low consumption, individuals and companies will be buying electricity from the grid to charge their batteries. And when production is low and consumption is high they will sell it again. The battery will have a marginal cost based on its efficiency, the amount of energy that gets lost in the charging and loading back to the grid. This cost will drive the prices of energy. The hours during which electricity is cheap and when it’s expensive will change drastically from current patterns. 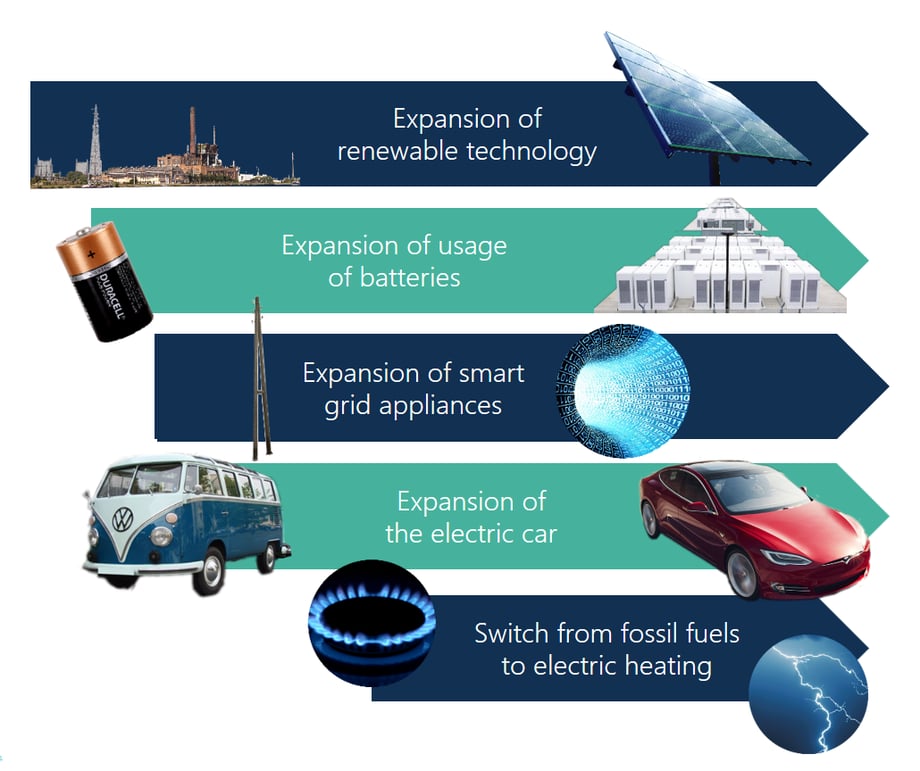 To organize this continuous exchanging of electricity and its underlying economic value, we will necessitate a lot of intelligence. The grids will transport not just capacities but also information on those capacities. And the contracts that we sign will have to be adapted to that information technology. These smart grids will have nothing to do with the first attempts that we are seeing today as such appliances demand too much manual input. Future smart grids will be algorithms that calculate the cycles of loading and unloading batteries based on a myriad of information streams:

And finally, this smart grid will also act as your energy consultant by taking decisions for you on when to buy and when to sell, when to load and when to unload the batteries and it will automatically take decisions that approve the energy efficiency. But I don’t worry about this trend. You will need consultants such as E&C very hard to guide you through these deeply transformative processes.

Are you prepared for the future? Find out more about energy futurology and more specific about the impact of block chain on energy procurement at the Transatlantic Energy Conference. www.eecc.eu/TEC

Benedict is one of the founders of E&C Consultants. He collaborated with many companies in energy procurement in the past twelve years at E&C. Benedict has a broad experience regarding the energy markets in many different countries.

E&C is a boutique energy procurement consultancy with an international team of true energy entrepreneurs that offer a unique blend of global capabilities and local expertise.

Our offices in Europe, the US and Australia serve more than 300 clients from South-Africa to Norway and Peru to Australia that have an annual spend between 1.5 million and 1.5 billion dollar.