Ever since the beginning of this year, we notice a strange phenomenon on the Dutch exchange for power forwards, www.apxendex.com. This exchange publishes settlement values twice a day. End-of-day values are published in line with other European energy exchanges. Particularly for the Dutch market, Endex NL is also publishing a settlement value at noon. Ever since the beginning of this year, we have noticed that these noon values are higher than the end-of-day values. Since the 9th of May, for example, the Cal 13, baseload noon values ended higher than the end-of day values every single day. 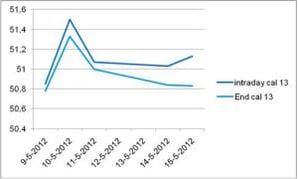 With the help of our analysts, I launched some further analysis. I found out that in the first four months of 2012, the noon values were higher than the end-of-day values no less than 77% of the trading days. This could be explicable in a fundamentally bearish market, however, this is not the case. In 50% of all days since the start of the year, the Dutch Cal 13 ended higher than the day before, meaning that essentially the market had as many bullish days as bearish days. The end-of-day price of the 2nd of January 2012 for Cal 13 baseload was 51,3 euro per MWh. On the 27th of April it was 51,4, which supports our argument that the market in the first four months was equally divided between bullish and bearish, making it all the more remarkable that on 77% of those days, the noon value was higher than the end-of-day value. As you can see in the graph below, the trend is clear, there is an increasing gap between noon values and end-of-day values, with noon-values ending higher on most days.

It is clear from the graphs above that something is going on at the Dutch power forwards exchange. We observe similar trends for the other contracts. It is recommended that the relevant authorities investigate what is going on. Especially since this upward tendency for noon values on the Dutch forward contracts is not without consequences.

About seven years ago a new type of contract was introduced in many European power markets, the so-called clicking or tranche model contract. Industrial consumers have en masse adopted this contract type.  A consumer agrees a pricing formula with his supplier, based on which he can “click” his price for a given period, for example a calendar year. The formula contains a market-based parameter, for example the Endex NL Cal 13 contract for fixing the price for consumption during 2013. By giving consumers the possibility of using multiple clicks, this contract type is a good response to the increased need for risk management of industrial consumers of power. Moreover, as the formula is based on a publicly available parameter based on effective trading, the consumers have the certainty of using a relevant and transparent pricing mechanism. Due to this, power exchanges such as Endex have gained extra importance in the liberalized energy markets. They are not only  a platform that allows suppliers to hedge the prices that they offer end consumers. They also constitute an important factor in the price determination for end consumers. Any problem with the pricing on these wholesale exchanges like Endex is not just a problem for suppliers, it is a problem for the market as a whole.

The noon value is of special importance to Dutch end consumers. They have developed the habit of fixing prices on that noon value. This is very comfortable. In other countries, buyers need to wait until the end of the day to know the value at which they are going to fix their price. In the Netherlands, the companies can arrange their price fixings over noon and go home at five. However, if these noon values are systematically inflated, the Dutch consumers are obviously paying a high price for this comfort.

We are not saying that there is not a plausible reason for the inflation of Dutch noon prices. But it is absolutely mandatory to find out what is going on and to exclude the possibility of manipulation.