The end of ‘speculation spring’? 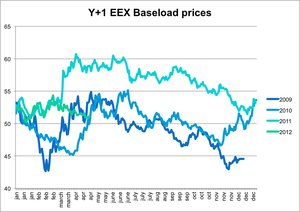 In 2009, 2010 and 2011 energy prices were in a bullish trend by this time of the year. Certainly for electricity, there was a returning pattern. Year ahead prices rose during the first six months and then dropped back in the second half. We dubbed this phenomenon ‘speculation spring’ at E&C. During the first six months, the year ahead is still far in the future. This gives the market ample possibilities for speculation about the disasters that might affect the supply – demand balance by the time the year ahead is near. However, as the end of the year approaches, reality sets in. That cold winter that year ahead bulls counted on, doesn’t materialize. Governments across Europe shut down less nuclear power plants than expected. Demand for energy doesn’t recover in line with the economic recovery. The disasters don’t materialize and prices start to fall. Such speculation in forward energy markets is supported by the fact that market participants seem to systematically underestimate the price lowering effects of certain evolutions:

In most discussions with representatives of energy companies, you are consistently bombarded with scary stories of future energy shortages. Same stories on conferences. Even our new Belgian state secretary of energy Wathelet spread a scare story last week. At current low power prices, there would not be sufficient investment in gas-fired power stations which would lead to power shortages in Belgium, he remarked. A great display of policy consistency, I would say, as that same man had a law voted to freeze energy prices at current levels a week earlier. Ask any man in the street whether he thinks energy shortages are around the corner, and a large majority will say yes.

Energy shortages do occur … sometimes. During those few cold days in February, for example. However, have you remarked how short-lived the price spike was? If you look at the average spot price levels for North-West European gas and electricity of the past four years, you can only conclude that during most of the time there was more than enough energy.

Spot prices don’t lie. In most of our markets, spot price determination mechanisms have been installed that make sure that the price is a correct reflection of supply and demand of energy at that moment. It is much harder to speculate against spot markets, specifically in electricity markets where storage capacities are non-existing and gas markets where they are very limited. Because speculation in the spot market can only be physical speculation. Producers or traders have to consciously withhold capacities from the market to drive up prices. If you own a gas-fired power plant, and the electricity price that you can get is higher than your gas costs, you can turn in money by producing. You can’t say, I’ll produce and keep it in store for when prices are higher. Average spot prices in the gas and the electricity markets in the past years have consistently been lower than the average forward prices. This means that there has been sufficient supply to cover for the (declining) demand.

Forward markets are much more subject to speculation. Basically, if you sell on a forward basis you make a trade-off against the future spot prices that you expect. That opens up the possibility of speculating about supply – demand tightness. The further into the future, the more room for speculation: so many things can happen between now and the end of the year. This explains the “speculation spring” phenomenon” on the heavily traded year ahead contract. By the second half of the year, we saw in the past three years how reality kicked in. The supply reductions and demand increases didn’t materialize. The spot price remained at relatively low levels over the summer months. And if you are the 15th of December and your spot price for power is still around 50 euro per MWh, it becomes hard to make your case for 60 euro per MWh for supply of power in the year that starts in two weeks. It is a law written in stone that as a forward contract gets near expiry, it will get closer to the spot market level.

Rising prices in the first six months, bear correction in the next six months. We saw this pattern three years in a row. Obviously, in our struggle with the unpredictability of energy markets, we are tempted to call this pattern eternal. If only life would be that easy. If only prices would be at their best level at the same moment year after year. Buying energy would become the easiest job in the world, just wait for the pre-determined moment and buy. If only … This year’s development, with speculation spring not taking off shows us once again that the reality is more complex. And we need to continue to be careful. Maybe in 2012, it will be the other way around. Maybe we will see a bull market in the second semester. Nobody can tell, it will depend on the extremely complicated equation of energy supply and demand.