On Thursday the 1st of March, the government of the Walloon region (the South of Belgium) adapted the green electricity targets. By 2016, 30,4% of all electricity consumed in Wallonia is to be green. This is a near doubling of the current target for 2012 which is at 15,75%.  These targets are to be viewed in the light of the green certificate systems that Belgium’s regions apply to promote the production of green electricity.

The prices in these market are limited to the upside and the downside by two further measures. On the upside, we have the penalty that suppliers are to pay when they don’t submit enough certificates.  This is 125 euro for Flanders and 100 euro for Wallonia. On the downside, there is the price that grid operators are obliged to pay for certificates. When the system was conceived, green energy investors expressed their worries that in case of over-supply of certificates (i.e. when the production of green power exceeds the target), the prices would collapse to zero.

They argued that this risk would keep anyone from investing in green energy. The legislators therefore added an obligation for grid operators to buy the certificates at a certain price, e.g. 90 euro for a windmill built in Flanders after 1/1/2010. To add to the complexity, the minimum prices have been diversified according to the technologies. For solar panels, the minimum price was put above the penalty price, at a staggering 450 euro per MWh at the beginning (this has been brought down recently).  Owners of solar panels never sell their certificates to suppliers, they always sell them to the grid operators. These sell them on to the suppliers at the much lower market price, bearing the loss between the minimum price and the market. This loss is then passed on to the end consumer through increasing grid fees. This system gave birth to a heavy discussion as adverseries of green electricity argued that people that put solar panels on their rooftops have these paid for by their neighbours. 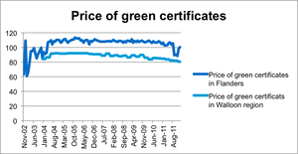 For a long time, the prices of green certificates were stable, at around 110 euro per MWh. However, we recently saw a collapse of the prices. The reason is over-supply. The system has been more succesful than anyone had ever imagined. Initial resistance to windmill construction has declined a lot recently, solar panels became the favorite investment of house-owning Belgians and the government was very lenient in applying the tag ‘green’ to biofuel projects. Above all, the economics were wonderful. A windmill has a payback period of less than three years if you can sell certificates at 100 euro. Solar panels’ payback got reduced to five years. That’s excellent investment. As over-supply causes prices to collapse, everyone starts to sell the certificates to the grid operators, increasing the bill for the end consumer. Some even prefer not to wait (as they need the cash immediately) and sell below the minimum price to suppliers.

It is remarkable that at a moment when the federal government is taking a reckless measure to reduce the energy bill for end consumers (see my previous blog), the Walloon government adopts a green power policy that is sure to increase it, without giving much thought to alternatives. Moreover, Wallonia wants to add to the regulatory uncertainty of pricing energy in Belgium by obliging suppliers to pass through the real cost of buying green certificates, an obligation which we think is completely impossible to enforce. We are still waiting for the exact details of the Walloon regulation, but it looks like bad news for the consumers of power in that region (and good news for the investors in green energy).

The Flemish government seems to be more sensitive about the energy cost-increasing consequences of the certificates system. It wants to rethink the whole system, a laudable initiative. I realize that every subsidizing system will produce unwanted side-effects. The certificates system has been an attempt to minimize these by introducing a market element. I think that this attempt has massively failed, due to the following reasons:

In the late nineties, when the Kyoto protocol was hammered out and our climate policies conceptualized, ‘market mechanisms’ were conceived by proponents of the rational market theory as a panacea for reducing the cost of reducing carbon impact. The European Trading System of carbon emission rights is a good example of the application of this market mechanism. Emissions trading has failed, as I have argued before in this blog (see my entries of 6/7/2011, 31/1/2011, 2/12/2009 and 28/8/2009).  From the above, it should be clear that certificates trading is also failing to deliver a stable, low-cost subsidies system for promoting green electricity. This is not because markets are not efficient or always fail. It is because too much in these market is constructed. The problem isn’t that the laws of supply and demand do not function. It is that supply and demand in these markets are constructs, they are artificially created and the design flaws in their creation have unwanted side effects.

I recommend the Flemish government to get back to basics. Investors want stability. Society wants cost-efficiency. I think that a simple direct subsidy system is the most effective way of achieving this double goal. A subsidy is a subsidy, point. Just award an annual aid amount to every new green energy project (production of heat included), guaranteed for a period of 10 or 15 years. Yearly adapt the subsidies to the evolution of the investment costs. Oblige the green investors to share the information on investment costs with your administration so that they can make a correct assessment of that evolution and drive the adaptations. Work together with other European governments on this price observatory. Aim to give investors of green electricity a stable return of 7 to 8% on their renewable energy investment. Have the average market price for the energy that they produce deducted from the annual aids. Pass through the cost of these subsidies to the end consumers in a clear and transparent green energy tax. Create a system of tax reduction for energy-intensive industries.

As a father of two children, I can only cheer for the rapid development of green energy in my country. However, as an advisor to energy consumers and producers of green energy, I dissaprove the inefficiency and unnecessary complexity of the current certificates systems.