Brent price in euro per barrel at an all-time high

Have you recently visited a petrol station somewhere in a Euro country? Shocked by the price level? Well, unnoticed by the press, the cost of oil has risen to its highest nominal level ever. The Brent price ended the day at 120,11 dollar per barrel on Thursday the 16th. This is well below the Brent-in-dollar peak of 146,08 on the 3rd of July 2008. However, the euro was then trading at almost 1,6 dollar, whereas now the euro trades below 1,3. The consequence is an all-time high Brent-in euro price of 92,52 euro per barrel. That is the reason why filling your car these days is a costly affair on Europe’s roads.

Fortunately, Europe has managed to significantly reduce its dependence on oil products. Due to fuel efficiency standards, cars guzzle less fuel. Residential heating has been switched away from oil products thanks to environmental policy and the expansion of the gas grids. And environmental policy again, has reduced the usage of oil for industrial and power producing purposes. The consumption of oil in Europe is displaying a steadily declining trend ever since 2005.

High oil prices would have been bad news for almost every continental European consumer of natural gas three years ago, as they all had contracts with the price of natural gas pegged to oil prices. Fortunately, the end market in North-Western Europe is now massively switching to the gas-to-gas pricing of Hub markets (NBP, Zeebrugge, TTF, NCG, Gaspool, PEG). True, these gas prices have also risen in the past year, but not as much as oil prices. With the oil-indexed gas contracts of the past, natural gas would have cost more than 40 euro per MWh by now, just as it did in 2008. At the forward Hub markets, gas consumers can now fix prices below 30 euro per MWh and spot prices haven’t risen much above 25. However, natural gas consumers in countries where access to Hub markets is difficult (Spain, Portugal, Italy, Eastern Europe), have every reason to look worryingly at oil market developments.

High energy prices are particularly bad news for Europe at this moment. Financial markets continue to worry about the potential cataclysm that Greek bankruptcy could cause in Europe’s banking sector. Partly due to this fear, economic growth has stalled. This week Germany published a -0,2% figure for the last quarter. Policymakers across Europe are hesitating between austerity programs to reduce budget deficits (right wing) and policies to support economic recovery (left wing). High energy costs might push struggling businesses over the bankruptcy line. Other companies might have possibilities to pass through higher energy costs in the prices of their products. But is this increasing inflationary pressure a good idea at a moment that consumer confidence drops due to the fear of a Greek tragedy? We should all hope that the combination of a recovering US economy and a weak euro supports export-oriented businesses. But it is clear that the record high Brent-price is bad, bad news for Europe.

The reason for increasing oil prices is simple. OK, here in Europe we reduce the consumption of oil. And yes, the US is reducing as they have also embraced the reduction of fuel consumption by cars. However, such declines are completely undone by developments in emerging economies where the consumption of oil doesn’t stop from growing. On a worldwide scale, we consume more oil year after year. There is enough of if left for the time being. But producing it comes at ever higher costs, which explains the increasing oil price. Squeezing petrol out of the oil sands of Alberta simply is a much more expensive affair than drilling holes in the Arabian dessert. Of course, there is some risk premium added to the price, as the markets ponder the consequences of an oil embargo on Iran and the increasing risk of military conflict in the Persian Gulf. Of course, the forces of speculation are also back. But beware of under-estimating the underlying problem. The increasing demand in oil cannot be met with cheaply produced stuff. The marginal cost economics of oil markets explain the high prices and volatility. 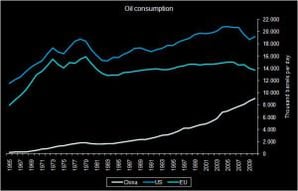 Even if the world’s economy is growing at a slow pace at this moment, it is still growing in the emerging economies, and faster than anywhere else in the world. And countries like China, India, Brazil or Russia, haven’t managed yet to decouple economic growth from oil consumption increases. So, unless we get a repetition of the financial-economic catastrophe of 2008, there isn’t much chance that filling your car will get much cheaper in the near future.