Can the world be powered without nuclear?

The nuclear disaster in Fukushima is still far from over. I am not a nuclear scientist or a radiation specialist, so it’s as hard for me to judge how much harm has been done exactly to the environment and human health. As an energy market specialist however, I am pretty sure that this event will influence energy and environmental commodity markets in the coming years. I was surprised to find this report by the WHO, the UN outfit for worldwide healthcare. It states that the deaths caused by the Tsjernobyl disaster are actually much lower that often presumed. Again, I am not scientist enough to judge the truth of this statement or the solidity of the analysis that led to it. But it could be that nuclear disasters are a little bit less apocalyptic then we mostly presume.

However, such scientific evidence will never win from the popular perception. As of now, the world’s population has these images in their memory of men in radiation suits and with masks on scanning little babies with spooky devices to check whether they are contaminated. This has already become an important political reality. Last Sunday the German Green party made a historic victory in elections for the regional parliament of Baden-Würtemberg. The region is home to six of Germany’s seventeen nuclear power plants. The Greens have pledged to shut them down. Italy has delayed its plans to build its first nuclear power station by two years. 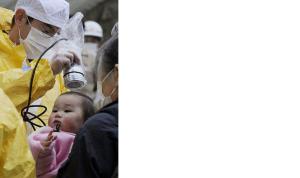 Politicians across Europe that have previously decided to turn back nuclear phase-out schemes try to save their skins by promising their voters a thorough stress-test of the nuclear power plants. I am afraid that these tests might lead to further shut-downs. The stress tests will undoubtedly unveil security failures. A few years ago, a Belgian activist managed to get on the premises of the Doel nuclear power station. According to her, it was very easy to get in. Electrabel, the operator of the Doel plant claimed that she never made it to the nuclear part of the plant. However, the Fukushima disaster has shown us that the non-nuclear part is vulnerable as well. If somebody gets in and seriously damages the pumps that are to supply the cooling water, what happens? Are nuclear facilities really capable of surviving a plane crashing on top of them? And again, as Fukushima has shown us, will the non-nuclear facilities on the sites pass the stress-tests?

If security issues arise in the stress tests, I believe that politicians will most likely copy Angela Merkel and shut down plants. In the post-Fukushima era, no politician will want to take the risk of keeping open a power plant that is not declared 200% safe. Any small issue with safety will lead to temporary or even definitive closures. Therefore, these stress-test swill also be a period of stress for the energy markets.

In the past weeks we have clearly seen how the markets react to the shutting down of nuclear power plants:

So far, these effects have mostly been observed in the forward markets. In Germany, the Netherlands, Belgium and France, Cal 12 electricity now trades at almost 60 euro per MWh. The spot price has continued at a reasonable level. This clearly signifies that the forward price increases signal a fear of supply shortage, but in the real world, no shortages have occurred yet, even if 7% of Germany’s power capacity is down. Spare capacity and cross-border trading explain why no supply crunch has occurred yet. However, we should watch very carefully at what happens in Q2. This is traditionally maintenance season and a lot of nuclear power stations across Europe are up for planned maintenance. If some unexpected shutdowns due to stress-test issues would be added to that, we could see a supply crunch materializing.

For the longer term, it is highly probable that in many countries the plans for building new nuclear power plants or for keeping existing plants open for a longer period will be ditched. This obviously raises the question whether the world is capable of powering itself without using the nuclear option. According to this article in the Economist we can. They point out that nuclear power plants produce only 14% of the world’s energy. In recent years we have seen several countries grow to 20% shares of power production for wind and solar, countries such as Germany, Denmark or Spain. If the whole world would follow that lead, we could replace nuclear power plants by renewable power plants, without pumping extra CO2 in the air. (Pro-nuclear proponents often make the argument that without nuclear power plants we cannot reach the Kyoto targets). Of course, if our electricity consumption continues to grow, or starts to grow even more rapidly, e.g. because we all start driving electrical cars, the 14% target will become ever more challenging.

Buyers of energy need to be aware that this transition will come with a high bill. German power consumers currently pay 35 euro per MWh for green energy, money that goes to the producers of green energy in the shape of a feed-in tariff. This makes Germany one of the most expensive countries in Europe for industrial power consumption.

Even if we can transfer to a non-nuclear power production in the world as a whole, in Europe, this will be significantly more difficult. The proportion of electricity produced in nuclear facilities in Europe is twice as high as in the rest of the world, almost 28%. Face it as it is, Europe is the must nuclearized zone of the world. France for example, produces as good as all its electricity with its 58 nuclear plants. This can’t simply be replaced by renewable energy, which due to its intermittent character cannot provide all the energy. When the sun doesn’t shine and the wind doesn’t blow, you need another technology to make the power. That technology is likely going to be natural gas-fired power plants due to a variety of reasons:

A combination of renewable and gas-fired power plants seems to be the most likely option for a non-nuclear power market. Switching over to this market will demand huge investments. Part of those investments will be passed through to the end consumer in the form of feed-in tariff financing or green certificates to support the construction of windmills and solar panels. The gas transport infrastructure in a country like France will need to be expanded. And the increased demand for gas will put pressure on the gas markets. The volatility that we have recently witnessed in power and gas markets is therefore likely to continue.

Nuclear power enthusiast minted the term nuclear renaissance a few years ago to describe the trend that they saw of a return to more nuclear power production. However, if you look at the graph below, you will notice that in Europe the share of electricity produced in nuclear power stations has systematically decreased in the past ten years. The situation in Fukushima could speed up this decline. 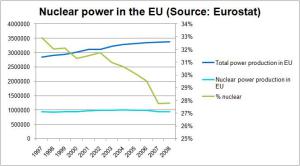