The past month has been a bit low in blogging activity, due to my being busy creating a report on the European gas market. Research of supply and demand figures brought me some surprising insights. You can read an extract of the report by clicking on the link below. Please read the executive summary of the report below. Contact me at benedict@eecc.eu if you want to receive a full copy of the report. 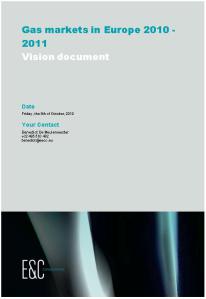