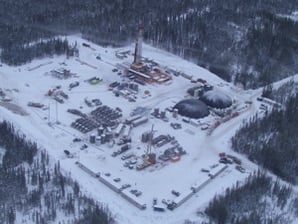 In the past five years, it looked like we were coming very close to the point where we would have to say, "We've done it, we've spoiled the earth's riches". As a larger share of mankind took its part in the global wealth, the consumption of energy rose steadily. Production of energy was unable to keep pace. The oil price peaked to almost 150 dollar per barrel. Peak oil seemed to move from theory to fact. On top of that, scientific consensus grew that burning all that fossil fuel was destroying a fundamental characteristic of life on earth: the climate. The end of fossil fuel burning seemed near. Oil, gas and coal would become increasingly scarce and unwanted because of their environmental impact. Many industrial consumers of energy told me in those past five years: "In the long term energy prices can only rise", and adopted an energy buying strategy with such long term bullishness in mind.

It looks like the earth is prepared to give mankind a second chance, or at least a few extra decades to look for a good energy solution without burning hydrocarbons. Recent technological developments have opened up a vast reserve of those fossil fuels that have the lowest impact on climate change: natural gas. Engineers have found out ways to tap into unconventional gas sources such as shale gas, tight gas and coal-bed methane. It's not that we have discovered a new reserve of energy wealth, it's just that we have developed technologically so that we can extract more from the soil than we previously could. And this is not some technology which lies ahead of us in the future. Thanks to shale gas production, it looks like the US surpassed Russian production in 2009 !

This sudden glut of natural gas is not without consequences for energy prices. Since the middle of 2009, natural gas prices in Europe have decoupled from the oil prices. Whereas the oil price was rising, gas just kept falling lower and lower and lower. In the past winter, the coldest in 25 years in North-Western Europe, the spot price for natural gas (on the British NBP, Belgian Zeebrugge, Dutch TTF and German Gaspool market), never went much higher than 15 euro per MWh, to be compared with prices above 40 at the beginning of 2008.

Now, many will say that these lower gas prices are due to the decline in industrial and power production demand in the wake of to the economic downturn. But that is not exactly true. As I have said, the past winter was exceptionally cold. This has caused gas consumption to rise to record highs. Of course, these highs would have been even higher if the industrial demand was at its 2008 level. But they were record high, and despite that, no price spikes occurred. The reason for that? Every week LNG ships unloaded their cargo in one of the UK's new LNG terminals or in the recently expanded terminal in Zeebrugge. All this LNG gas was available, not only because of investment in LNG production in e.g. Qatar, but also because of the lack of LNG demand in the US, where the shale gas was supplying the extra winter gas.

We should be very careful about shouting 'bonanza' in the energy market. Conventional gas producers and resellers will be quick to point out the risks of some backlash. This could for example be the environmental impact of the horizontal drilling and rock shattering necessary to produce shale gas. But with every article that I read about this shale gas thing, it looks more and more like this could be the big game changer. An illustration of this could be the situation at the Kitimat LNG terminal in Canada. Originally designed to be an LNG import terminal, it is now being refitted to become an export facility of LNG coming from shale gas sources. Instead of becoming a major importer, Northern America is preparing to become a major exporter of natural gas. This clearly illustrates that if this shale gas is becoming a reality, how deeply it changes the rules of worldwide natural gas economics. The massive flow of gas from Russia and the Middle-East to the US and Europe might not materialize. For Europe, it looks like there are vast reserves in Poland and maybe also Germany. China is hopeful about its underground holding shale gas as well.

I think that the world will gladly adopt natural gas as its main source of energy, for three reasons:

1. Natural gas is cleaner that coal and oil. So, if we replace coal and oil consumption at a faster pace than we use extra energy, the net result for the environment will be positive.

3. Gas-fired power plants are easy to fire up and scale down. Therefore, they are excellent peak-load producers. We need more such peak-load capacity as a back-up for the renewable power that we increasingly use.

If we continue to invest in wind, solar and other renewable energies like we do now, if we build gas-fired power plants as back-up facilities, if we don't massively pull out of nuclear power production, if we keep improving the energy efficiency of our appliances, we could even switch to electricity for driving our cars and still reduce the overall greenhouse gas emissions. It is maybe my optimistic nature that makes me say this, but it looks like the doomsayers got it wrong (once more). More pessimistic natures will point out that the availability of cheap gas will slow down the development of renewable power production. I partly agree, we will need continued political will to support renewable. I even partly cheer that prospect, in as far as cheap gas will keep us from investing in those sometimes insane biomass projects that are currently running.

To me, the shale gas development looks like the most important event in the energy markets in decades. But as I've said, we should carefully watch out for any unsuspected backlashes that shatters the optimism to pieces. E&C will carefully watch this for you and inform you what it means for your energy buying.