The euro is currently trading at 1,36 dollar. The reason for the recent downtrend in euro value is the troubles with the Greek budget. Greece's credit ratings have been downgraded as it becomes clear that the country is in much deeper financial trouble than previously presumed. The Greek government has lied about its budget figures to enter into the euro zone. It now becomes clear that the country is facing a budget deficit of 12,2% in 2010. A deficit that it has to finance by taking on ever more expensive debt. Anyone with some basic understanding of economics knows what this is leading to: bankruptcy. The only way for Greece to avoid this is by making drastic cuts in its expenses. Already, the first protesters have taken to the streets of Athens against the budget discipline measures.

The fact that the economic troubles of Greece are dragging down the euro seems to be exaggerated at first sight. Greece is only 2,5% of the EU economy. As a comparison, budgetary trouble in California is even larger than in Greece. And California represents 12,5% of the US economy. Why are markets so much more worried by developments in a dwarf economy like Greece's, more so than those in California?

The first reason obviously is the fact that Greece belongs to the euro zone. The euro is a unique experiment. Never before had so many different countries with such different economic characteristics been brought together under a common currency. From the outset, some economists were skeptical about the euro's chances for success. They now see those doubts confirmed in what looks like a self-fulfilling prophecy. The euro-skeptics publish reports about how Greece can drag down Europe, the markets react on that by pushing down the euro, causing the skeptics to produce even more dramatic reports, and so on, and so on.

The movement described above is: a downward spiral. The only way of getting out of that is by taking some drastic measures. And this is not exactly what we expect (and see) from the European Union. I can understand why it is hard for a German or French politician to explain to German or French taxpayers why their money is to be spent to save a country which obviously is spending too much money. And the fact that the Greeks have lied about their situation is obviously not to their advantage. But still, great statesmen are characterized by their capacity of taking decisions that even if not supported by a majority of the voters, are clearly in the general interest. Neither Miss Merkel nor Mr. Sarkozy are currently showing such statesmanship. They prefer to have the new EU President Van Rompuy making some half-baked declarations. It is precisely this lack of political clout that makes the markets fear that the euro policymakers will be unable to stop the spiral that might start when Greece stumbles.

First of all, if Greece goes under, the confidence shake-up that this will cause will increase the cost of borrowing for other European countries. And Greece is not the only country that currently relies heavily on borrowing to prop up a budget slashed by the economic downturn. Larger economies such as Spain and Portugal are also deep in the red figures. If the cost of borrowing increases for them, we might see further mayhem. Secondly, Greece has most of its money borrowed from German banks. If Greece goes broke, German banks might face a situation comparable to what happened with American banks when US homeowners could no longer pay back their debts.

This is what really frightens me. What happens if a large German bank gets into trouble because of unpaid loans to Greece? Could we see a repetition of the disaster that struck the markets in 2008? By massively going short on euro (and euro assets) this seems to be what 'the market' is betting at. And this short-selling speculation is increasing the underlying problem.

This last remark shows me how utterly self-destructive the financial markets can be. If we get a second financial crisis, we will also get a second round of lay-offs in the financial sector. So, by short-selling the speculators, the traders in the banks, are creating the fundamentals for a further collapse of their sector and they are undermining their own job security. Still, just imagine you are a trader in one of the banks. You see your neighbor winning a big bonus for this year by short-selling euro. It must be very tempting to go for that same easy win. Even if you realize that by doing so, you become part of a machinery that might ultimately eat you. It's understandable, which makes it even more sad. The way the banking sector treats the Greece problem clearly shows that they have learned absolutely nothing from the 2008 experience.

Let's all hope that the Greece spiral doesn't get out of control. Everyday, in every conversation with clients we hear the timid signals of economic recovery. It would be very unjust if this timid recovery would be destroyed by another case of uncontrollable speculation. 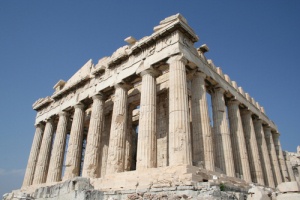