How Poland is giving fishes to the energy procurers

The title may sound somewhat strange, but if you’re familiar with the quote of Anna Richie’s Mrs. Dymond this may put a little wasp in your head.

Back in January, we alerted our clients on a law implemented by the Polish governments which would freeze prices for households, industrial consumers and (most important!) public companies. Being, everyone. Someone had noticed that electricity prices went up quite a lot following the price hike of CO2 certificates. With parliamentary elections ahead, measures had to be taken. On top, public companies often choose the easy way to buy energy: by signing their contracts with a fixed price or a tariff rate at the end of the year.

The law was written on December 28th and accepted on December 29th. First-class efficiency. How it would be implemented in practice was less clear… The only thing that was clear, was the uncertainty it brought to the market. Liquidity at POLPX decreased in a zip (graph). The first trade for Cal 22 was only done in May. An obviously, a red light was switched on at the European Union as this is perceived as illegal state aid. 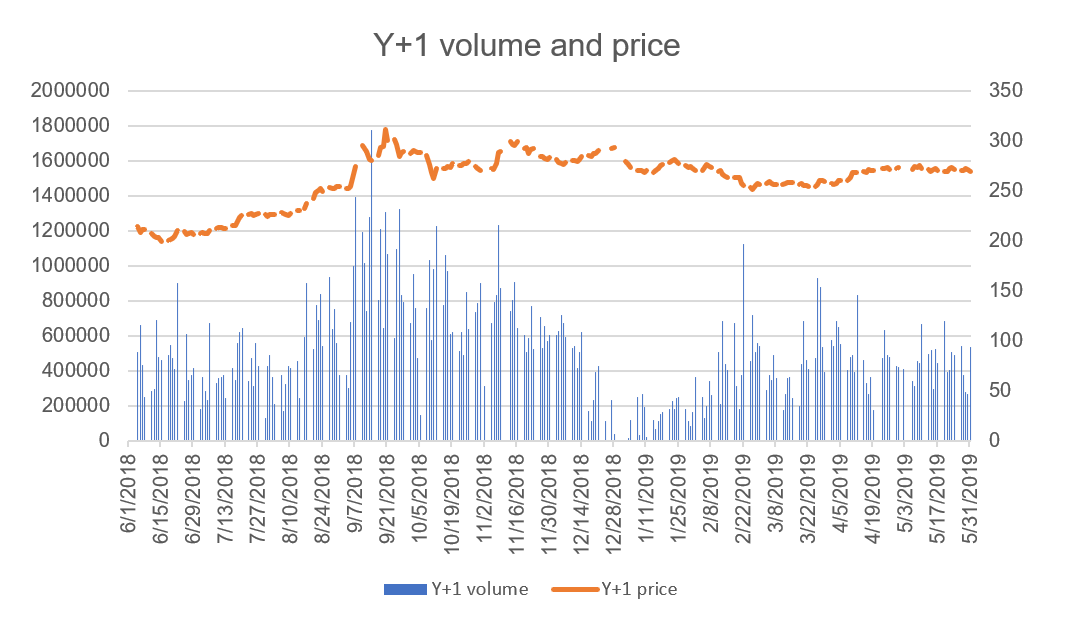 The law implied that the price level of June 2018 would be applied for 2019. No, that’s not a general fixed amount but the price you were paying at that moment. The bad students in class, companies that fixed at 280-300 PLN/MWh at the end of 2018, will still benefit from a better price without any effort.

Below is an example of one of our clients that performed very well but if his competitor forgot to do a good job in energy procurement, he’ll now benefit from a better price anyway. 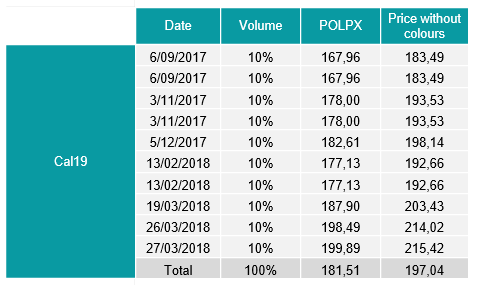 In the first months of 2019 we saw some suppliers applying the price level that their client had back in June 2018, hoping the government would reimburse the difference in a later phase. Others charged based on the contract and would reimburse their clients once the practical side of the law became more clear. Six months later this isn’t the case yet. And another issue, how would this difference be calculated? How will each supplier prove what’s his real cost of providing the client of electricity?

The measure would only be applicable for contracts signed after June 30th 2018. The majority of our clients sign their contract three years in advance in order to be able to apply proper risk management. So far, so good.

What if you didn’t have an electricity contract in place yet for 2019?

Industrial consumers negotiating contracts per quarter, came intro trouble when they asked the suppliers for offers for Q2 2019. Suppliers didn’t want to offer due to the insecurity and they had to rely on a supplier of last instance with prices three to four times higher. Will this difference also be compensated once it comes into law?

Suppliers aren’t only afraid to offer on the short term, but the uncertainty also stops them from participating in tenders further ahead as they don’t know the exact implications of the law.

In Romania, we’ve seen similar influence on the market liquidity when the government interfered. After a lot of suppliers went bankrupt, the government decided that the amount suppliers must put inside the deposit in order to participate to the exchange, had to be raised. The deposit is used when suppliers don’t fulfil the obligations of their transactions. As not all suppliers were able to provide these, market liquidity here decreased as well.

Czech Republic faced a similar problem as Poland. Energy procurement is even bundled in one tender for all public hospitals without any risk management applied. They decided not to freeze the tariffs and yes, in the end these higher prices will be paid with tax money, same goes for the difference in Poland that will be paid back to energy suppliers using tax money. There’s one difference, in Czech Republic they fired the guy that was in charge of the energy procurement and I’m sure the next one will do better. That’s what they call teaching people how to fish.

Consultant for the Central European market.