A cold snap wreaks havoc on the Spanish energy market

Spanish energy markets were in turmoil last week. On Thursday the 19th of January, the day ahead electricity price averaged 88 euro per MWh. That is the highest level since the 6th of February 2006. The new Hub market for natural gas, Mibgas, went through the roof as well, racing to 41,87 euro per MWh on the 12th and 13th of January.

It’s cold in Spain. Tourists in search of mild winter weather were caught in snowstorms and frost. The Siberian circumstances are exceptional and obviously cause a peak in demand for electricity and gas. The power system struggled to cope with this peak. In the Communidad Valenciana, 32.000 clients were without electricity and utility Iberdrola had to rush in 23 emergency generators. Álvaro Nadal, the new Minister of Energy is all over the press, warning the Spanish citizens to get adapted to more costly energy.

The Minister is citing all kinds of reasons for the current peaks in prices: next to the increased demand for heating purposes he points out: nuclear shutdowns, increased exports to France, low output of wind and solar, the higher price of crude oil and the high price of natural gas. The current cocktail is indeed very bullish. But the high prices for electricity and natural gas in Spain are not just a phenomenon of this winter. Spanish energy markets are more expensive than other European markets for years.

If we look at electricity, than we can see that the Spanish spot prices were at more or less the same level as German spot prices until 2014 and then started to rise structurally higher. Analysts are often pointing at the high percentage of renewable energy in Spain to explain high spot prices: according to Red Electrica’s data, 49,9% of Spain’s power production capacity is renewable. The wind doesn’t always blow and even in Spain, the sun doesn’t always shine, causing spot prices to rise high on some days. The events of the last day seem to support that analysis. 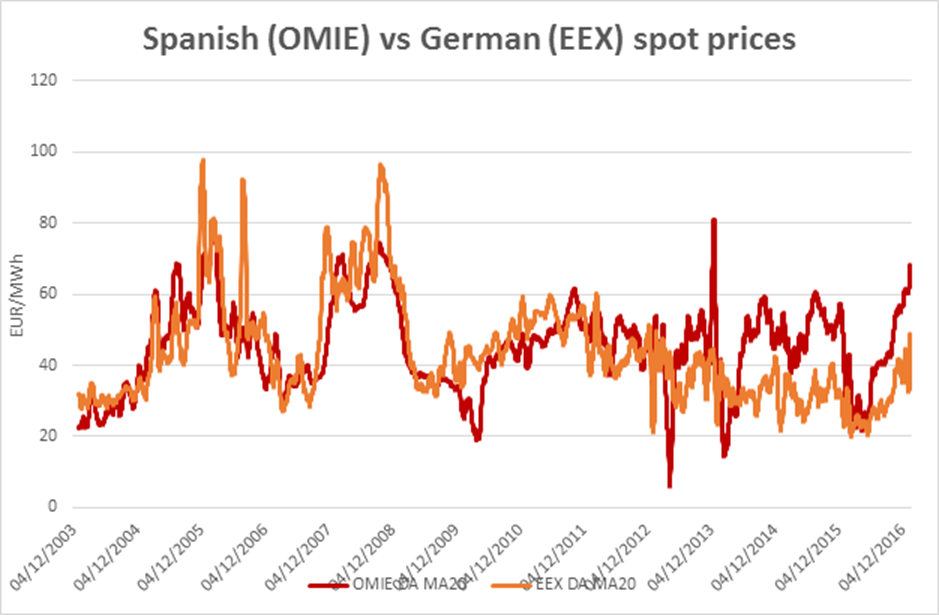 However, Germany has an even higher percentage of renewable power production capacity: 52,43% according to data of https://www.energy-charts.de/power_inst_de.htm. In Germany, increasing amounts of renewables on the grid have clearly had a beneficial effect on the wholesale electricity prices. Why haven’t we seen the same effect in Spain?

The current situation of high prices and blackouts in some regions seems to point out that Spain has a shortage of power production capacity. However, as we can see on the website of Red Electrica, on Friday the 20th demand peaked at 40.294 MW. That is well below the total production capacity of 100.088 MW. It is even below the installed capacity of traditional thermal power production (coal and gas), which stands at 41.154 MW. Moreover, at the moment of peak demand, Spanish nuclear power stations were producing 7.100 MW, hydro power stations 6.168 MW, wind turbines 5.007 MW and photovoltaics 675 MW. Adding up the figures, you really don’t understand why prices were soaring that much.

It is true that the supply and demand balance in Spain is getting more tight. With a recovering economy, Spain is seeing an increase in its power demand, +0,8% in 2016. At the same time, production capacity dropped 0,9%, due to the closure of carbon-fired power stations. However, the overall situation still looks very comfortable compared to other European countries like Belgium or France when it has nuclear power stations shut down. Then why are Spanish prices higher?

The Spanish power producers seem to be incapable of delivering a reliable, reasonably priced electricity to the grid. Germany’s 194.530 MW of available power capacity produced 648,2 TWh of electricity in 2016. That’s a utilization of the production apparatus of 3.322 hours. That’s a lot better than the Spanish power producers’ 2.500 hours with 100.088 MW of installed capacity producing just 250,266 TWh. Again, the high percentage of renewable energy in Spain is not an excuse, as Germany’s having an even higher percentage.

Minister Álvaro Nadal would better use the current situation to call upon the Spanish power production companies to improve their performance. Moreover, as we have mentioned before, the systems that organize Spain’s power supply and demand logistics are byzantine and dysfunctional. Get yourself on a plane, Mr. Nadal, and go and have a look at how other European countries managed to get their markets better organized. A better organization that results in a better utilization of the power production park and lower commodity prices for the end consumers.

Last week you could hear in the Spanish news that the high prices were due to the usage of “expensive” combined cycle gas-fired power stations. However, at the moment of peak demand last Friday, there was just 2.229 MW of such combined cycle power stations at work, which is less than 10% of the total installed capacity of 24.948 MW. It is a fact however, that the cost of producing electricity with a gas-fired power station is much more expensive in Spain than in other countries. This is due to the high price of gas.

Most of the natural gas in the Spanish energy market is still traded at prices indexed to oil markets. The recent increases of oil prices have therefore caused Spanish gas prices to increase. If you look at the pricing in the other European markets, determined by Hubs such as TTF where the demand and supply of natural gas itself is setting the price, you would say that the development of the Mibgas Hub in Spain is an excellent idea. However, an idea is only good when it’s well executed.

Last summer, we saw Mibgas prices trading at a level similar level as TTF. In May and June 2016, we even saw a lower Mibgas price than TTF on some days. This sparked hopes that we would finally see normal gas prices in Spain. However, as of August, the Mibgas price started to rise high above TTF. On the 13th of January, the Mibgas price was 21,14 euro per MWh more expensive than TTF or other Northern-European prices. 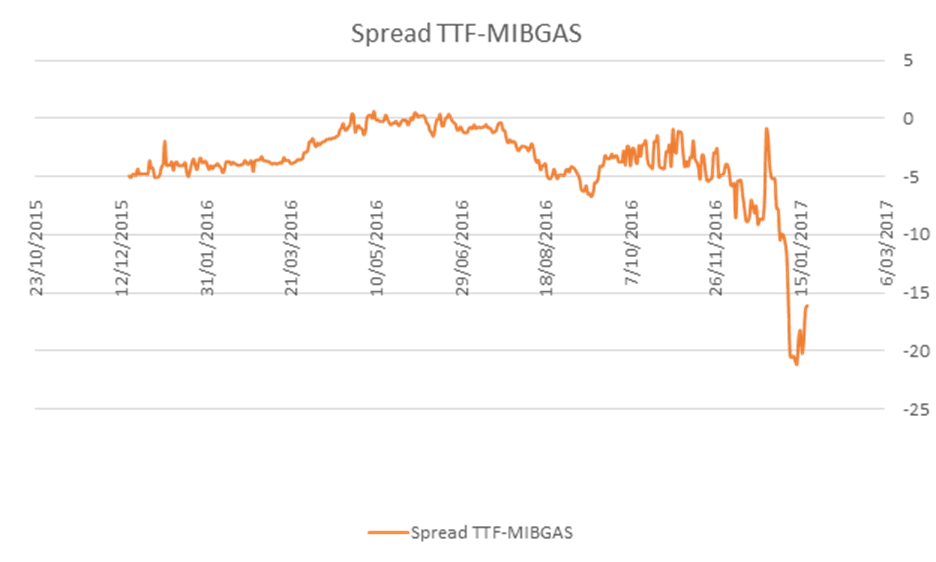 Spanish gas suppliers (and analysts paying them lip service) point at two reasons for this:

1. The fact that LNG ships from Algeria for example, rather sail to Asia where gas prices are currently high.
2. The lack of interconnection capacity with France and the Northern European prices.

Yes, Asian prices are reducing LNG exports to Europe. But the 41,87 euro per MWh that you could get in Spain earlier this month, was about the highest price for natural gas on the planet at that moment, so why didn’t the ships come to Spain? Moreover, the “less LNG due to high Asian demand” counts for TTF just as well, so why is that price in Spain so much higher than in the North of Europe?

Lack of connection by pipeline to the North is also a fact. However, there is no country in Europe that has so much (unused) LNG import capacity as Spain. There is only 1.305 kilometer by sea between the ports of Zeebrugge and Bilbao. On the 13th of January, a trader could make 21,14 euro per MWh by loading LNG in Zeebrugge and sailing to Bilbao. That must be one of the most lucrative LNG trips in history. But no ships did it.

Spain might be badly connected to the rest of the world with gas pipelines, but it is well connected with LNG terminals. But these are not being used. Why? Because getting the gas into the LNG terminal is possible, getting it out and sell it in the internal Spanish market seems to be all but impossible.

Spain has been the last of all European countries to launch a Hub market. Preparing for that launch, Spain was more focused on how to organize the financial aspects than the physical aspects. Whereas the physical side is key. A Hub should facilitate third party access to the gas system by the establishment of a nation-wide entry-exit zone and the introduction of an efficient, cost-effective balancing system. From the current high prices and lack of liquidity, it is clear that Mibgas has failed to achieve this. Again, Spain has introduced systems that are different from what we see in the rest of Europe. So, Minister Nadal, go and have a look in the rest of Europe and get this mess of a Spanish energy market fixed.