French year ahead baseload power ended the day yesterday at 39,9 euro per MWh, backing off from the 42,5 euro per MWh peak that it reached one week ago. The price increases came amid worries over next year’s power supply. Today (12th of October), 37% of France’s nuclear production capacity is shut down due to safety probes. With 76,9% of France’s electricity in 2015 produced with nuclear power stations, it is normal that markets worry when a supply crisis looms. Moreover, the fears are exacerbated by shortages of hydropower stocks due to dry weather. With 9,48% of all power production in 2015, hydro is France’s second source of power production. Stocks currently stand at 68,3%, the lowest level for the time of the year since 2010.

France has a nuclear addiction. Only the US produces more energy from atoms and no country comes anywhere near the high percentage of power production through nuclear. This addiction has been a deliberate choice. It was France’s answer to the oil crisis of the 1970’s. Ever conscious about its role in this world, the French prime minister Messmer estimated that nuclear was the safest option to reduce resource-poor France’s dependence on energy imports. This was summarized in the slogan: “France is poor in oil but rich in ideas”. The nuclear ideas were sold to the population by offering them cheap prices, hiding the real costs of nuclear through massive subsidies to state-held nuclear champions EdF, the producer of the energy, and Areva, the builder of the power stations.

Recently, public opinion and politicians, mainly from the currently governing socialist party, have turned somewhat against nuclear power. After the Fukushima disaster, it is clear that nuclear energy isn’t as safe as promised. The exact harm caused to man and nature by Fukushima is a source of intense debate. But if you take into account the 196 billion dollar clean-up bill estimated by the Japan Center for Economic Research in March 2012, it is clear that the risks should not be underestimated. Moreover, it is a myth that nuclear power is cheap. France is currently building a new nuclear power station in Flamanville. On top of massive delays, the project is suffering a threefold overrun of its original budget to 10,5 billion euro. The French government, hoping to build similar EPR-reactors all over the world, is swallowing that bill. But even EdF admits that nuclear power is far from cheap, as it negotiated a 92,5 pound per MWh guaranteed price with the British government to build a new nuclear power station at Hinkley Point. That is more than twice as high as the price paid for year ahead baseload power in the UK at this moment. And three times more than the price paid for year ahead power at its lowest point earlier this year.

Maybe one day we will name Flamanville as the project that killed the nuclear industry. For not only have its overruns of budget and project time proven the flawed economics of nuclear. It also sparked the safety concerns that put serious questions regarding a third pro-nuclear argument: its reliability. Carbon concentrations were discovered in the steel used to build its pressure vessel, and it is feared that these could cause integrity issues that result in nuclear disaster. Alarmed by this, the French nuclear safety authority has ordered probes in 18 reactors causing the shutdowns that currently rattle the markets. This safety issue is a worrying reminder of the situation in the Belgian nuclear power stations in the last years, where similar worries about vessel integrity caused on and off shutdowns resulting in sharp price spikes during 2014 & 2015. Prices were not just higher but also more volatile and unpredictable, causing many Belgian energy buyers to make “mistakes” by panic buying on the peaks. Recently, the French power price has risen high above the German and Belgian prices in similar sharp spiking activity. 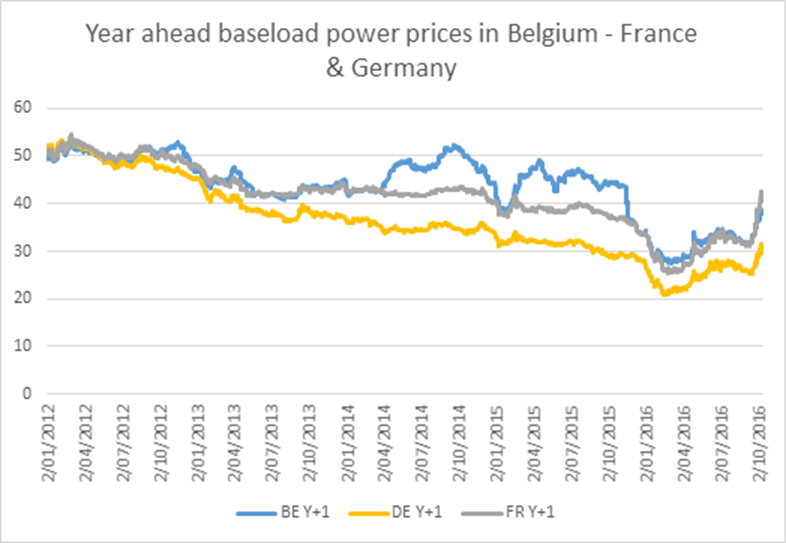 The comparison of German and French power prices is also showing that Germany has become structurally cheaper in the last four years. Anyone that had predicted this in 2011 would have been called a nutcase. Germany announced its plans for a quick shutdown of nuclear power plants. Everyone expected this to result in higher pricing. The contrary happened. Now, I do acknowledge the role of lower coal prices in this. But even now, when coal prices have recently increased by more than 50%, German power is still much cheaper than French. Germany has heartily embraced the renewable energy revolution. This has caused high add-on costs for paying back the subsidies granted to the many windmills and solar panels that were built. But it also resulted in structurally low commodity prices.

The new energy market reality shown in Germany is one of decentralized production spread over a multitude of technologies in small power stations. That contrasts sharply with France’s addiction to large, centralized power production with the one nuclear power technology. Today’s situation is confronting France with the vulnerability and reliability issues of this old market model. Market situations are always changing, so the current situation could reverse in the future, near or distant. But in any case, what happens now in France’s power market should cause politicians in France and other countries to rethink energy policies that bet on nuclear. For consumers of energy in France, difficult times lie ahead. We don’t want to think about what would happen if the carbon concentration issue would turn out to be a genuine safety risk and the current situation becomes permanent. But even if this issue is just the proverbial storm in a teacup, the Belgian situation has proven that due to the scientific complexity surrounding nuclear power, such storms can last a very long time. And as France is an important powerhouse, producing 17,3% of all EU electricity in 2015, surrounding markets will continue to be affected as well.

Want to stay up to date about the European energy markets?