India enters the 2020s with an intent to achieve two very realistic yet challenging goals: 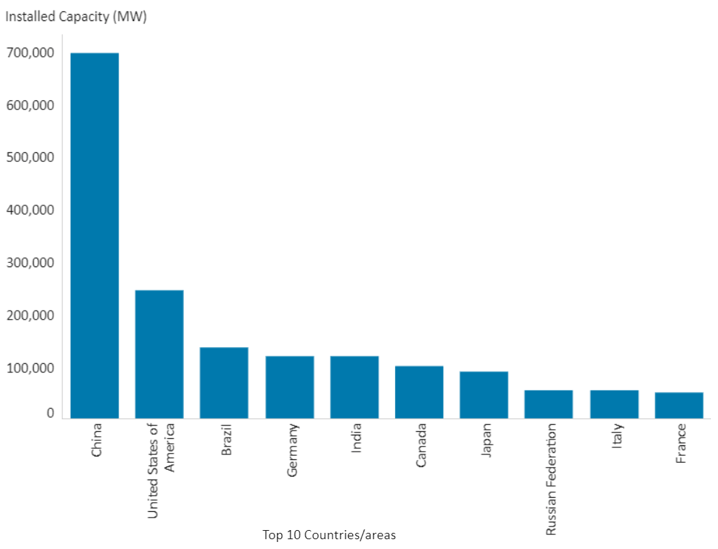 The reason why the first goal makes an interesting narrative relates to India’s commitment to 2016’s Paris agreement. India’s trajectory of evolving from a ‘developing’ to a ‘developed’ economy has to be sustainable with decreased dependence on fossil fuels. The 2015 meeting between President Obama (then President of the United States) and Prime Minister Modi on the sidelines of the Paris summit makes a touching story of how India decided to comply with  the United Nations Framework Convention on Climate Change’s (UNFCCC) targets. The agreement endeavours to keep the global temperature rise in this century below 2 degrees Celsius. According to the Climate Action Tracker, India is now 2°C compatible.

Per 2019’s annual report published by the Ministry of New and Renewable Energy (MNRE) – Government of India (GOI), thermal power plants accounted for a little over 63% of the total installed power capacity in the country at the end of 2018-19 fiscal year (the Indian financial year or the fiscal year (FY) is from 1 April of a year to 31 March of the next year). Thermal power was followed by contributions from renewables other than hydro power at 21.95%, further followed by hydro power and nuclear power – standing at 12.72% and 1.93% of the total installed electricity capacity, respectively. 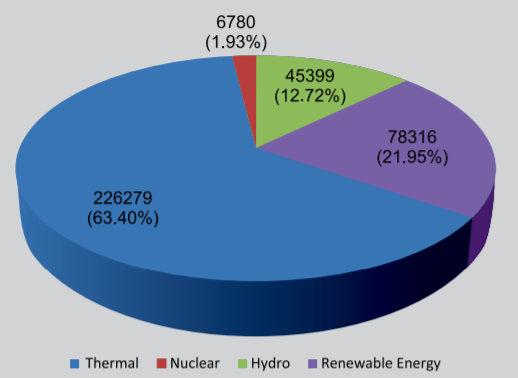 India’s proposal to the UNFCCC is that it will install a cumulative electric capacity of 40% from non-fossil fuel-based energy resources by 2030, which means that the Indian Government is committed to a sustainable path of development in the next 10 years. This is also supported by the fact that the grid´s interactive renewable power grew at a staggering 28% from 57.24 GW at the end of FY 2017 to 73.35 GW at the end of FY 2018, per the 2019 Energy Statistics report published by the GOI. The renewable installed capacity grew by another 15.44 GW by the end of March 2019. The target of reaching 175 GW of installed renewable energy capacity by 2022, which is the world’s largest renewable energy expansion programme, aims to have solar energy and wind energy contributions of 100 GW and 60 GW respectively.

The advent of renewables in the Indian grid has also had a bearish impact on the cost of electricity. Per an Institute of Energy Economics and Financial Analysis (IEEFA) article, the outcomes of ‘reverse-auctions’  have brought down clean energy prices to about 20-30% below the existing coal-fired power generating costs. The introduction of ‘reverse auctions’ for the procurement of renewable energy assets in India in 2017 meant that developers were given multiple opportunities for submitting revised quotations wherein they could lower prices to win the business and secure the best solar and wind sites for developing clean energy infrastructure. This has been one of the key reasons for the reduction of generation costs of solar and wind energy in India. The Solar Energy Industries Association based out of Washington D.C. terms reverse auctions as a fairly new way to procure renewables.

The increase in the deployment of clean energy assets in India is mainly due to two reasons. India’s geographic location lends itself to renewables and has led to the surge in the organic growth of renewables. And on the other hand, the Indian Government’s policies have been crucial in creating a synergy between this potential and the infrastructural growth in this sector. For instance, initiating a competitive bidding process has had significant impact in decreasing the generating cost of solar per mega-watthour from INR 6170 (USD 86.49 | EUR 79.82) in 2014 to INR 2440 (USD 34.20 | EUR 31.57) in 2018. Similarly, wind generation costs per mega-watthour have gone down from INR 4200 (USD 58.87 | EUR 54.33) in 2014 to INR 2430 (USD 34.06 | EUR 31.44) in 2018. Additionally, all 29 states in the country have been directed to achieve 10.5% solar Renewable Purchase Obligation (RPO) by 2022. To foster investments, India also allows 100% foreign direct investments in the renewable energy sector. As per a Department of Industrial Policy and Promotion (DIPP) – GOI’s press release, this sector had received foreign investments worth USD 3.20 billion between 2015 and 2018. In her recent budget speech, the Finance Minister of India Ms. Nirmala Sitharaman, reiterated India’s commitment to the Paris Agreement by increasing the annual budget allocation to the MNRE by 10.62% and decreasing the allocation to the coal ministry by 2.25% as compared to the allocations in the last financial year. 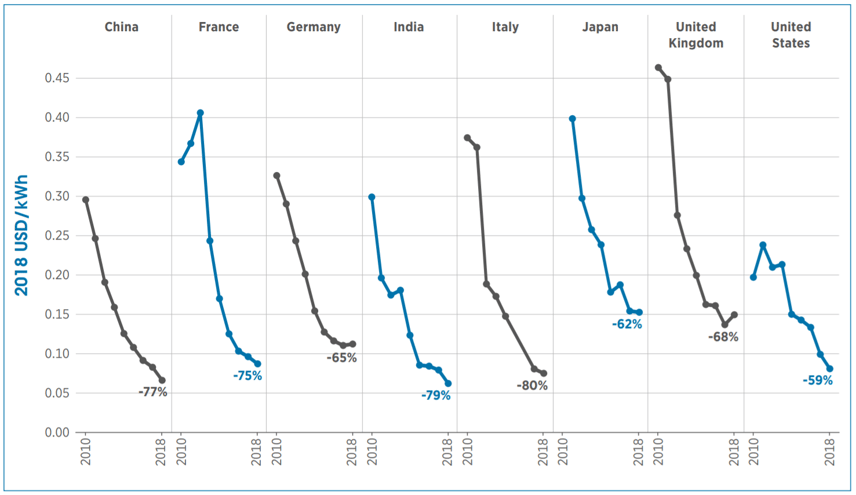 What opportunities do all these extra renewables bring to power purchase agreements in India?

Market trends suggest that corporate Power Purchase Agreements (PPAs) have been on the rise in India. 1.60 GW of installations in 2018 made India the second largest growth market for corporate PPAs after the United States. Decreased solar and wind generation costs and increased solar panel efficiencies can be listed as the two main factors for the increase in the number of contracted PPAs in the industrial sector in India.

The preliminary decision of whether to contract a PPA should ideally first start with putting together a sustainability strategy based on environmental targets and economic feasibility. It is also important to reflect on how energy consumption fits in the overall sustainability puzzle. The strategy needs to be developed with inputs from production, legal, finance, engineering, procurement, and operations teams. It is also necessary to consider any administrative or governmental compliance orders with respect to energy, water, waste, and air while formulating a comprehensive sustainability strategy.

A sustainability strategy which highlights and emphasizes the need to procure clean energy will incentivize the mutually inclusive paths of two PPA models:

The choice between an on-site and off-site PPA depends on local laws and regulations, available rooftop and land area, geographic location, credit risk, and methods of financing. The reason why their mutually inclusivity presents itself as a good prospect is the room to avert several key risks. The first being volume risk – by using both PPA options, the consumption profile over the length of the PPAs can be better managed. Supply risks in terms of receiving an intermittent supply (since solar and wind tend to depend a lot on the weather conditions) can be averted. Pricing risk is also mitigated by diversifying the portfolio of assets. Finally, financing risks are also lowered because fixing an off-site PPA (especially if it’s a virtual PPA) can be financially complex and difficult while an on-site PPA can often involve some initial investments (based on the method of financing).

A PPA project can provide more sustainability gains than solely greening electricity supply and cost savings. The Clean Development Mechanism (CDM) under the Kyoto Protocol allows emission reduction projects in developing nations to earn certified emission credits (CERs). These CERs can be sold and traded. The CDM Project Cycle is a 7-step process which needs to be followed by any emission-reduction project participant to earn CERs. This involves requesting validation from the respective national authorities. India’s National CDM authority awards certified emission credits to projects which gain approval for mitigating green-house gases (GHGs) and lead to emissions reductions.

A few challenges to tackle

Whilst the renewable energy sector in India has become both infrastructurally and financiallyhealthy in the past 10 years, it also needs to overcome a few challenges to ensure continued growth. The intermittent nature of wind and solar pose a challenge in integrating their assets into the grid and in ascertaining grid stability. This in turn means that the development of a wholistic battery storage is essential. Also, the renewable energy generated is settled at 15-minute intervals at some of the state grids, which means the developer takes a loss if the generated power doesn’t find any off-takers. Inter-state settling of power could help in addressing this concern. On the one hand reverse auctions have helped to increase the clean energy deployment, but on the other hand they have also reduced the magnitude of margins for the developers. Therefore, setting economically feasible tariffs for both developers (who sell) and distributors (who buy) becomes necessary. Public awareness on the ease of installing solar panels on rooftops, acquiring land for large projects, increasing domestic manufacturing of solar panels and wind turbines, etc. is a key point that could facilitate enhanced growth of this sector.

This is further supported by its will to evolve as a sustainable economy as the Indian administration assumes accountability for the concerns regarding climate change. From a global standpoint, the energy transition seems complicated yet (environmentally and economically) convenient. It will be very interesting to see if the development of renewables (in India) is influenced by the sustained bearish natural gas futures prices or if the increasing concern for the environment propels growth in the clean energy sector.