Did you already consider an ARENH swap?

What is the ARENH Mechanism ?

The ARENH mechanism was created in 2010 and is part of the NOME law. The law was set up to boost competition between energy suppliers and the state-backed utility EDF. At that time, EDF owned more than 95% of the electricity capacity production, including nuclear power plants which produced electricity at a competitive price.

The ARENH mechanism obliged EDF to sell up to 100 TWh of nuclear electricity to other suppliers, which represents about 25% of its total production. This volume of ARENH electricity is divided over different suppliers depending on their client portfolio. The exact volume allocated to each client in the end depends on their consumption during the weak demand period. This mean that for most clients, only a share of their electricity will be ARENH.

The ARENH price was set at 40 euro per MWh in January 2011 and increased to 42 euro per MWh in January 2012. This price should not only cover short term costs such as operational costs, maintenance costs but also long term costs such as storage of radioactive waste and dismantling power plants. The mechanism is planned to last at least until 2025.

Why are we talking about the ARENH Mechanism now?

Due to French nuclear outages and probes, the French electricity prices for next year have surged above the 42 euro per MWh level, making the ARENH electricity competitive.

In addition to the more competitive price, French clients that buy ARENH electricity have an extra advantage: capacity certificates are included in it. This is something you should take into account when comparing the ARENH price to the market price as the cost of the capacity mechanism is not included in the latter on. For industrial clients, this is usually a cost between 1 and 2 euro per MWh per capacity certificate. This means that in case prices for 2018 decrease below 40 euro per MWh, it would be more interesting to do a market swap instead of an ARENH swap.

Most contracts offer the possibility to choose for an ARENH swap for the year ahead until the end of October. For 2019 and 2020, there is no emergency to do an ARENH swap, as you’ll have until October the year before to decide on choosing ARENH. 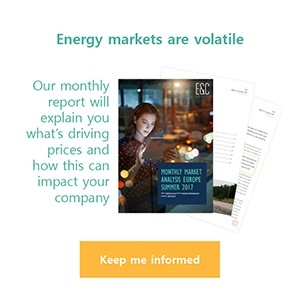 What are the risks of an ARENH swap?

Even with the current ARENH price at 42 euro per MWh, there’s no guarantee you’ll be able to benefit from this price when you do an ARENH swap. There’s two reasons for this:

Should you do an ARENH swap?

Here’s how to react in a few different scenarios:

As a business developer I create opportunities for growth of E&C. I consult with business leaders to determine if a partnership would be mutually advantageous. I conduct contract negotiations and close deals.