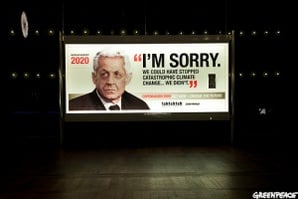 The big climate change show in Copenhagen is one week old now and is developing much as expected. Europe tries to raise the stakes by announcing its plans first, hoping that this will lure other countries such as the US and China into commitments of their own. Whatever the politicians claim, the environmentalists respond that it is not enough. And outside the congress center we have seen the first images of protesters getting beaten by policemen.

When delegates left the airplane at the busy Copenhagen airport, they were greeted by pictures of Obama, Sarkozy, Brown, Merkel or other top politicians in their old age saying 'I'm sorry', I could have done something in 2009, but I didn't. The pictures were made by Greenpeace and highlight the ethical character of the Copenhagen summit. They also make a clear reference to the latest movie on climate change. In 2006, Al Gore's 'An inconvenient truth' highlighted the scientific facts concerning climate change. Now in 2009, 'The age of stupid' is highlighting the moral aspect of climate change. I believe that this moralization is the appropriate approach.

Years ago, I studied climate change as a philosophical issue. We generally consider science to produce 'truths', to unveil theories that are confirmed by every single piece of fact. Karl Popper has learned us that science rather produces hypotheses that are accepted until they are decisively falsified by facts. This acceptance process is called 'corroboration', which is indeed a horrible word. Now, in simple, isolated empirical environments, this corroboration process can be pretty straightforward. The first black swan that pops up falsifies the theory that all swans are white. But in scientific practice, it is rare to find such a simple context. And the more meshed and chaotic the empirical environment, the more blurred this corroboration process becomes. Climate change is an excellent example of such a chaotic empirical environment. We are talking about the impact of human behavior, in itself a chaotic mesh, on the worldwide climate system. It is therefore only natural that we are currently going through a phase where for every empirical scientist pointing out facts that confirm the theory of man-made climate change, some other scientist pops up with some falsifying piece of evidence. Just consider how many years it took for every scientist to accept the hypothesis that smoking causes lung cancer. And believe me, testing that hypothesis is a lot less complicated than testing the complex of hypotheses regarding man-made climate change.

The question then is: is it morally acceptable not to do anything while waiting for a broader scientific consensus? Is it morally acceptable to hold on to that scientist producing a falsifying report as an excuse for not doing anything? That's exactly what the Bush administration initially did. It's like a doctor telling his patient to continue smoking because he just read that one article that says that smoking is not damaging. It could very well be than in thirty years time, we will find out that climate change is less harmful than the somber picture painted in the climate change movies. That the planet didn't heat as much as the IPCC predicted. That the oceans didn't rise to disastrous heights and didn't swallow islands like the Maldives. That people in third world countries were less plagued by catastrophes like droughts, storms, collapsing eco-systems, migrating diseases than we think they might. But if we wait to see this happening, it will be too late. The moral question, forcefully expressed in the picture Greenpeace is: 'is it morally acceptable to take that risk'.

Of course, politicians face a more complicated moral dilemma. Economists claim that reducing greenhouse gas emissions to slow down global warming to an acceptable level would cost 1% of global GDP. It is of course also morally unacceptable that they would waste this money on a fake problem. The question is: is that money really wasted? For greenhouse gas emissions to fall, we have to reduce our energy consumption. This brings the added benefit that we come less dependent on finite fossil fuels. Is that really such a bad thing? In my career as a consultant to businesses, I have seen several companies disappearing because they didn't invest in a more efficient production apparatus. I've never seen a company brought into trouble because they invested in using less energy. Becoming the world's most fuel efficient economy, creates a competitive advantage, especially when global energy prices rise as fossil fuels become more scarce.

In many internet forums, I meet with people that refuse to take this moral standpoint and stick with the lack of scientific consensus. I can understand that you think that evidence isn't conclusive enough to decide that climate change is man-made and is going to cause huge trouble. But I don't understand that you refuse to see that it could very well be that in twenty years time we will see this happening. And that it is unacceptable not to do anything about that today. Unsurprisingly, these 'deniers' are often US citizens. As Europeans, we should however be careful with our judgment. I think that there are three elements of American culture / education that causes climate change skepticism to find so much ground in US society. The first one is that Americans generally have a more positivistic attitude towards science, believing scientific theories should only be accepted if every single piece of fact confirms them. The second one is the American version of liberalism, with citizens adopting a hostile attitude towards state intervention. For us Europeans, it is simply much simpler to accept that our government takes a decision on an emission reduction target that we are to realize. The third one is the deeply routed conception that growing wealth goes hand in hand with growing energy consumption. Americans have seen the size of their fridges grow with the growing wealth of their country. The idea that progress could also mean a smaller fridge is absurd to them. I read this in many comments of Americans that think that using less energy would mean economic decline.

Mr. Obama has just accepted the noble price for peace in Oslo. This brings him in the company of some of mankind's largest moral examples. Let's wait and see whether he will show the same amount of moral leadership at the Copenhagen negotiation table.